In order to guide Pikmin that are carrying and leaders that are under the Go Here! feature throughout an area, they are told to follow a path, which is a series of interconnected waypoints. Because of the complexity of the areas and the simplicity of the waypoint system, there are some circumstances in which they will follow the incorrect waypoint, and take an incorrect path, often getting stuck.

Ideally, the waypoints are organized in such a way that for any given spot in the map, Pikmin and leaders will find their way into the main carrying path graph, and from there on out, reach their destination. But if the developers do not take into account all spots in the area carefully, there might be times where the closest waypoint is on the other side of the wall, or an obstacle, which in-game, will make the Pikmin or leader follow that instead of something more logical. Interestingly, in Pikmin 2, if the Pikmin fail to reach the closest waypoint after a while, they will sometimes head for the second-closest waypoint instead.

At times, the placement of the waypoints might not take into account the structure of an obstacle. While path decisions do take into account the existence of obstacles, and whether they are cleared or not, their geometry is not. This can lead to Pikmin or leaders attempting to follow a path, but be impeded by the wall of a bridge, or its underside.

The following is a collection of discovered oversights. These are found by examining the paths from the in-game files, and noticing any situations that could lead to movement problems. In addition, some of these oversights are also found by attempting to make Pikmin begin carrying objects (most commonly a lying leader) or ordering leaders with Go Here! in unusual places, such as under or over a built bridge, in an section with closed-in walls, or next to a wall that has a known path on the other side.

Unless otherwise stated, the oversights in this article apply to all regions and to the equivalent New Play Control! versions. 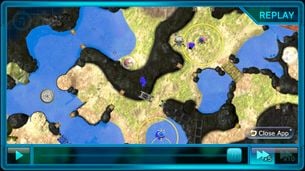 Pikmin in the middle of carrying a Sputtlefish up the wall.