Lighting is the arrangement or effect of objects that produce light, in order to depict a lit environment with depth and color. In video games, this specifically refers to any calculated light source that illuminates and shades 3D objects, as well as fog that obscures distant objects. In the Pikmin series, lighting is extremely important to achieving realistic-looking environments and objects, as the designers try to create as much realism in the Pikmin world as possible.

Sunlight is the primary source of light in the Pikmin series, and plays an important role in conveying the passage of a day. When a day begins, the color and brightness of a landscape try to suggest morning. As the day progresses, the sun gets brighter and the environment more colorful, until late in the day when it begins setting and colors become more orange as in a sunset. Each game in the series has a unique way of handling sunlight and the shadows it casts, and as the games progress, this arrangement gets closer to simulating real sunlight.

The only dynamic light is sunlight, that shades all objects but does not actually calculate shadows. This light moves throughout the day, beginning foggy and bright in the morning, clear and at average brightness for the majority of the day, and fading to yellow to orange and finally to very little light as sunset approaches (except in The Forest Navel; sunlight is still present there but does not move or change color). All objects in an area have shading based on this light, but none of the scenery casts real moving shadows based on this light. To help players perceive Pikmin locations, up to 50 Pikmin will cast soft shadows that move throughout the day, even when there is no sunlight. In order to optimize processing power, shadows cast by Pikmin are not drawn if more than 51 Pikmin are on the field; instead, they will all have faint shadows directly underneath them. Enemies always have this sort of faint shadow, except for the Beady Long Legs. Environmental objects like plants never move on the map, so one large texture accounts for all their shadows. The exception is Pellet Posies, which cast soft dynamic shadows just like Pikmin.

All other forms of light, such as Common Glowcaps, the light beams coming from the Onions, and even the light around Captain Olimar in The Forest Navel, are static lights. They do not cast any shading or shadows on objects, but simply brighten the area around them to aid visibility or provide light effects, such as the powerful exhaust from the S.S. Dolphin.

Sunlight in Pikmin 2 behaves very similarly to that in the previous game, except the color of sunlight varies by area, and fog is generally less pronounced. Around noon, the brightness of the sunlight generally increases, and toward the end of the day it dramatically decreases and turns orange. Yet at any point in the day, when a leader approaches an incomplete cave from above ground, the lighting always mixes a very foggy green color to its current color. All objects are shaded by this sunlight, but most of them (including static objects) do not cast accurate shadows. Instead, most moving objects cast circular shadows directly beneath them, and those shadows never move. However, unlike the shadows in Pikmin, these circular shadows can actually dim other objects, and their simple shape allows many shadows to be rendered at once. Several objects have uniquely shaped shadows for specific reasons, such as:

Areas have background shadows that are large textures, just like in the previous game, and these shadows sway but do not effect shading in any way. However, now that plants either cast their own shadows or none at all, background shadows do not have to account for the locations of plants in the area, and can add more interest to the look of the environment.

In caves, light is very limited, and sometimes completely absent beyond a certain distance, due to very dark distance fog. Objects are still shaded by some dynamic light to give them depth, but they are barely or not visible until a leader comes close enough with the static area light around them. This static light's radius, color, and brightness vary by sublevel, depending on what mood is being set. Once the Solar System is obtained, however, caves are always fully illuminated and everything is visible. Some sublevels behave this way anyway, such as metal or outdoor areas where backgrounds are visible, and the final sublevel of the Glutton's Kitchen. The Solar System does not affect the final sublevel of the Dream Den, and actually darkens the final sublevel of the Cavern of Chaos as explained here.

The Piklopedia in Pikmin 2 is unique in that it simulates a full continuous cycle of lighting including nighttime. During night lighting, ambient light is very dim and darkly blue. Objects still remain shaded and cast simple shadows, but generally colors are darker and duller. Once morning comes around sunlight gradually increases fog color advances from blue to purple back to a faint green, when sunlight finally brings the color balance back to its usual daylight look.

The Wii U can process a great deal more data about lighting 3D objects than the GameCube, and so Pikmin 3 presents a much more accurate representation of physical lighting. All objects in Pikmin 3 cast accurately shaped shadows, including the terrain itself. However, these shadows and lights do not follow the sun depicted in the sky; instead, shadows stay directly under objects for a majority of the day, so that object locations (particularly with airborne objects) can more easily be perceived. A new innovation Pikmin 3 brings is that background shadows, while they are still large textures, actually do affect the shading of other objects, even as they sway throughout the day. This minor detail greatly enhances the realistic look of the environment.

In caves, shadows are also directly under all objects. During rainy days, sunlight is generally darker, and rough surfaces have sharper highlights and smooth surfaces are glossy, to simulate wetness.

Although no other lights in the game than sunlight cast shadows, almost all other light sources are dynamic. Electrodes highlight cave surfaces, leaders' beacons and whistles dimly illuminate a radius around them, and most lighting effects (such as bomb rock explosions) throw accurate light onto other objects. Once again, all these effects give Pikmin 3 a photorealistic edge while still not seriously detracting from gameplay or visibility.

The Pikmin series's in-game objects are made real-world materials, or at least materials similar to those in real life. As such, they try to emulate the interactions with light real-world materials would have. Although these properties are more often faked than accurately calculated, materials allow players a sense of how in-game objects would feel, which gives them more thematic identity. Below is a list of material properties simulated in Pikmin materials, and some prominent examples.

Diffuse surfaces have visibly or even microscopically rough imperfections, so that when light rays hit the surface, it bounce off in many directions instead of one, diffusing the illumination over a large area. Due to the limits of the GameCube's power, most organic objects in Pikmin and Pikmin 2 (such as Pikmin and most enemies) have a smooth, matte-like material that does not reflect light sharply. In Pikmin 3, materials meant to look rubbery, dirty, or skin-like will look diffuse. 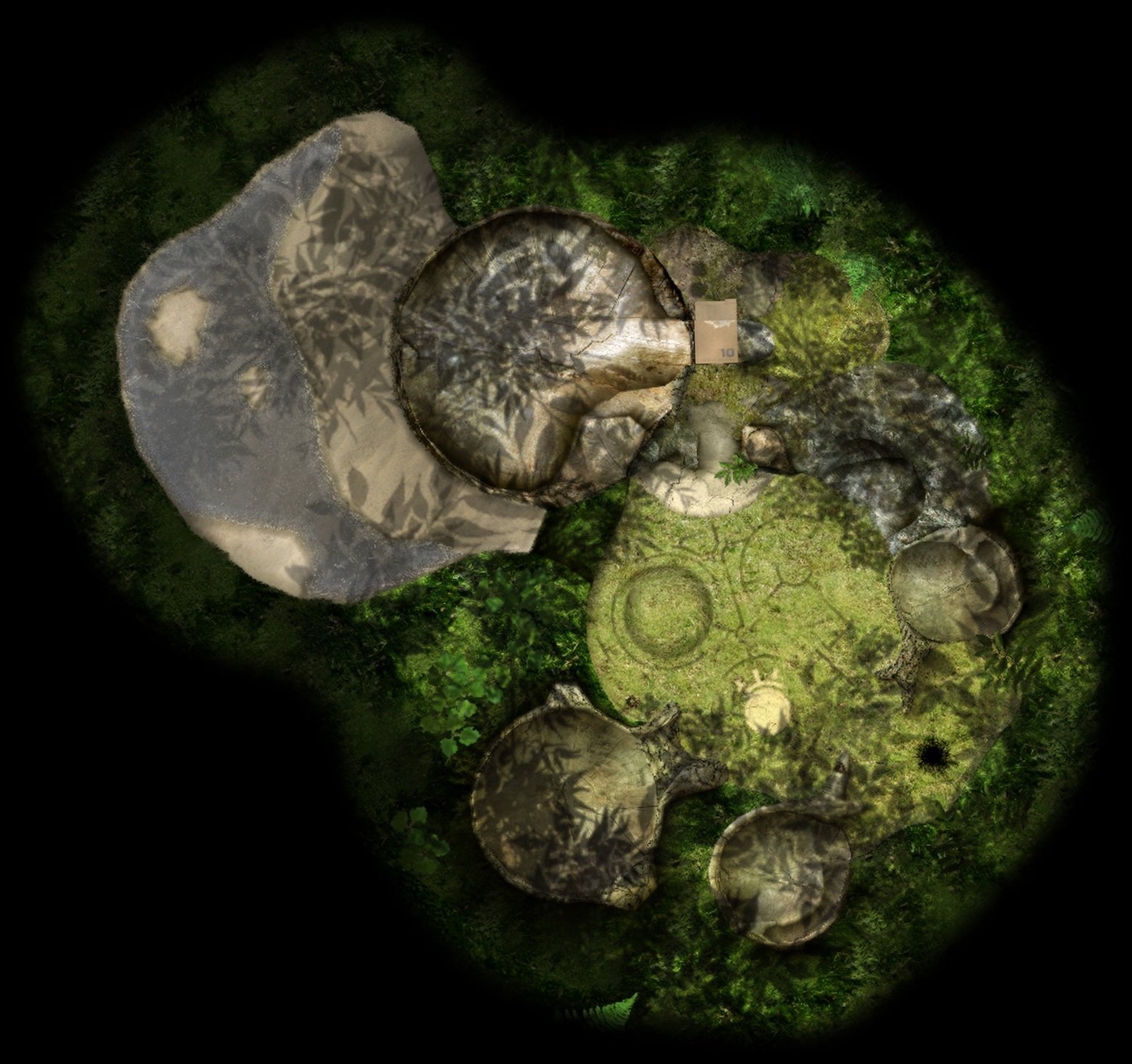 (Pretend the P is the Prima logo.) 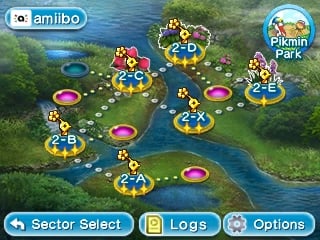 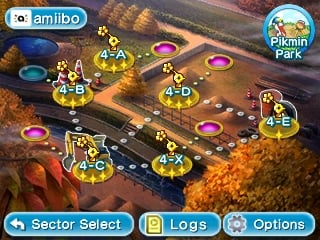