The Waterwraith (アメボウズ?, lit.: "Candy Bald Head") is a boss from Pikmin 2, found in all sublevels of the Submerged Castle. It can only be damaged by Purple Pikmin; however, the entrance to the cave is flooded, making them impossible to bring along. Since Purple Pikmin are only obtainable in the cave's final floor, the Waterwraith is completely invincible and immune to attacks in the first four sublevels. The Waterwraith is also found in the Bully Den in Challenge Mode.

Its appearance is generally humanoid in shape, with the suggestion of a head, body, arms, and legs, but without distinct characteristics, and with a watery, transparent body. As a matter of fact, its scientific name is Amphibio sapiens, which is similar to the human's scientific name: Homo sapiens. The Hocotate ship notes that although it can be seen, its sensors somehow detect nothing, leading to the conclusion that the Waterwraith's physical form is anchored in another dimension. It is one of the most dangerous enemies, as it can instantly kill Pikmin by just rolling over them, and cannot be deterred or defeated until the final floor. However, it does not appear immediately, instead giving the player a five minute period before appearing. In the Bully Den, both Waterwraiths will fall when the seconds counter falls to 270, leaving only 30 seconds for preparation.

The Waterwraith is one of the few bosses in Pikmin 2 which has its own background music, along with the Titan Dweevil and the Giant Breadbug. In the Submerged Castle, when it appears, its own theme plays. When it is fought in the last sublevel, the normal boss music plays, and when it has no rollers, a special, crazy, funky lighthearted version of the boss music plays. 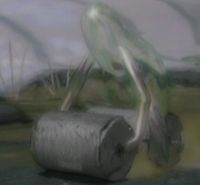 The Waterwraith will come on any sublevel of the Submerged Castle, after 5 minutes. When encountered, the beast falls from the sky. This will give two falling noises followed by two heavy thuds and then a noise like a scream underwater. It lifts up its front roller, and smashes it on the ground, crushing any Pikmin underneath. It then commences moving around on its stone rollers. However, before sublevel 5, there is no way at all to harm it; not even bomb rocks or attacking with Pikmin after using an ultra-bitter spray will have any effect. With that in mind, there are a few things to remember:

The following tips can also be used for story mode: 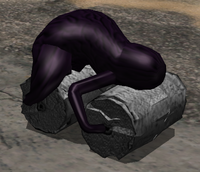 A stunned Waterwraith, vulnerable to attacks.

Since it can only be damaged by Purple Pikmin, the only way to combat it in the Submerged Castle is to survive until the final sublevel, where you can get Purple Pikmin via Violet Candypop Buds. When a Purple Pikmin lands on or near the Waterwraith in a fashion that would stun any other beast, it turns a deep shade of purple not dissimilar to that of the Pikmin that cause this state to come about. In this state, it is vulnerable to all Pikmin attacks. When the Wraith's health has been fully depleted, the rollers crumble and the Waterwraith will run aimlessly around the cave, no longer a threat to your Pikmin. Attack with more Purple Pikmin and then you can easily attack it with other Pikmin. When defeated, it will vanish into nothing, and you will be troubled no more. It drops the Professional Noisemaker, a useful addition to the Exploration Kit the first time you beat it in the Submerged Castle.

The Waterwraith can be petrified, which is useful to stop it if it is coming towards you, but while in this state, it cannot be damaged with normal attacks – Pikmin that attack will just cause an effect similar to attacking a reinforced wall in other games. Purple Pikmin that land with a thud on the petrified creature have a different behavior, however. When the boss has its rollers, a thud can cause the health wheel to appear, if it hasn't already. In the state without rollers, these thuds will actually cause a small amount of damage, and make it possible to kill the creature when petrified.

“All that is known about this creature stems from a few sightings deep underground. All reported sightings feature the same core set of details: a giant, viscous form with a clear, hazy sheen not unlike hard candy. One theory holds that it may be the ectoplasmic incarnation of a kind of psychic phenomenon, but as is usually the case with such theories, it is very difficult to prove. All witnesses report being suddenly overcome with fear upon sighting the creature, approaching a state of panic and near insanity. In fact, every report contains an inordinate amount of extremely vague details, which has led to suspicions that exhaustion and fear have caused some simple natural phenomenon to be viewed as a living creature.”

“Inedible. Known to cause mass hysteria, followed by leg spasms and internal thunderings.”

“What is this?!? I can see it with my optical receptors, but my sensors cannot detect it!

Could its physical form be anchored in another dimension? ...Attacking it is futile!

If only we could force it to take on physical form... But in its current state... Krzzzt-zrrrk!

“The anxious Waterwraith appears before the final floor of the Submerged Castle, but you won't be able to defeat it until you use Violet Candypop Buds to create Purple Pikmin on the cave's lowest level. One touch from a purple will make the beast temporalily vulnerable.”

The Waterwraith while sitting on petrified rollers.

The Waterwraith is the cause of a few glitches in Pikmin 2.

Animation of the Waterwraith standing still.