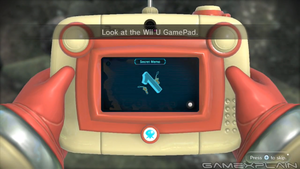 Secret Files, known as Secret Memos in the European version, are a type of data file found in Pikmin 3. Unlike most data files, these do not give any direct tips or information. Instead, they simply have a picture of some Pikmin with a random number from 0 to 9.

If a player collects all ten of these memos, the numbers they contain, in order, will form a secret code. Once they are all collected, the player can then go to a Wii U exclusive website, http://www.nintendo.co.jp/pikpiksecret using the Wii U's Internet Browser, and enter their code to watch one of five secret video exploration logs. Although there are five videos, a sixth one exists, but is not accessible through normal means.

Each code is pre-written, and corresponds to a specific video. If the player wishes to see a different video, they must restart their save file from day 1 and obtain a different combination. Each language has its own codes, which can be seen by changing languages in the console's system settings. Finally, each language's code list is unique (i.e. there is no pattern to convert codes from one language to another).

These data files are not found in Pikmin 3 Deluxe, and the majority of their file locations within the game were replaced by a new set of data files called Olimar's Log Vol. 2. The videos are incorporated into the game itself, playing before and after the stages of Olimar's Assignment.

There are two Secret Files per area. They are normally found in spots that are hard to find or access, but a few them can be found in relatively easy locations. They are always found in the same place, but the numbers in them depend on the code generated for that playthrough.

The following is a list of known codes, for each video, and for each language.

The videos resemble major cutscenes from the game, including the characters talking, and English subtitles appearing on the bottom. Each one is a video log with Captain Olimar or Louie commenting about their expedition, and takes place in a different area.

This video takes place on the Tropical Wilds. In it, Captain Olimar talks about the cosmic drive key. This video is 42 seconds long.

This video occurs on the Garden of Hope. Captain Olimar mentions the company's debt, in it. The video lasts for 40 seconds.

This video is on the Distant Tundra, and in it, Olimar talks about how his company had to cut some costs. The video is 56 seconds long.

This video has Olimar on the Twilight River explaining how the data files are scattered about the areas. It is 48 seconds long.

The video takes place in the Formidable Oak, and in it, Olimar talks about the golden object he saw – the Plasm Wraith – and about how Louie was reluctant to go on the oak. The video is 38 seconds long.

This log is not accessible via any Secret File code in the overseas version of the games, and has not been officially released by Nintendo. It was found on the website by analyzing the page's source code. In it, Louie explains how he got captured by the Koppai explorers, but managed to sneak off with their fruit. The video is 37 seconds long.

A few mistakes exist within these videos.

On the subtitles, the S.S. Dolphin is spelled like that on all but two of the videos, which have the spelling "SS Dolphin". This is the spelling used in the European version of Pikmin 3[1], but not anywhere else. Whether the intended spelling is with the periods or without is debatable, but the fact that the writing differs between videos seems to be the result of some mistake.

Although unimportant in nature, there are some mistakes involving the way Olimar looks towards Louie on the first four videos. In them, Olimar always looks to his left to see Louie in some dangerous situation. Given the points where Olimar and Louie are, it is actually physically impossible for Olimar to see Louie at his left, on some of the scenarios.