This article is about secrets in the games. For other uses of egg, see Egg (disambiguation).

Easter eggs are specially hidden secrets that have been put inside the games on purpose. Normally, these do not affect gameplay and are just for entertainment. This page will also include smaller secrets that do not exactly qualify as Easter eggs. At times, references to other series are considered Easter eggs as well, but those are not presented on this page for the sake of organization, and are instead listed on the Reference article.

is held down, Olimar will lie down on the floor. Nearby Pikmin will then pick him up, and take him to one of the Onions. When he's sucked in, he will hit the bottom of the Onion, and a light will appear from the large flower on the vessel. It will rise into the air, and explode into a burst of light, similar to fireworks.[1] Nothing else happens.

This feature was removed in Pikmin 2, but the leaders can still lie down and be carried after obtaining the Napsack. It is possible to wake up while being beamed up, at which point Olimar will still hit the Onion, but no fireworks will come out.

The game will play a small jingle to accompany the Nintendo logo. One of four jingles with varying levels of rarity[2] can be heard:

Interestingly, while these jingles are random in nature, they are actually decided directly from the console's real-time clock value, instead of using the game's usual random number generator.

If the player's leader has Pikmin in his group, there is a high chance the Pikmin will sing or hum something. They will only do so if they are walking, meaning it can happen as the player walks around the area with their group of Pikmin, but it can also happen if the player is close to a wall and some Pikmin in the group are huddled up against the wall, constantly pushing each other in such a way that some are in the walking animation. It can also happen by having them swarm. 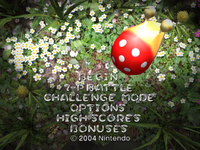 A Bulborb roaming around in the title screen.

On the title screen, some buttons perform certain actions:

It is notable that the title Bulborb does not function quite how one does in-game, in that the Pikmin do not try to attack it at all, and that it can eat White Pikmin without being poisoned.

The Ujadani are small insects that can only be found on specific days in specific locations in the Wistful Wild, making them a very rare encounter. They can be found on days 31, 61, and so on.

There are two known places where Totaka's song can play in Pikmin 2. The song is a small jingle hidden by composer Kazumi Totaka himself in some games he's worked on, like Mario Paint.

An example of one of the hidden murals.

In certain Pikmin 3 areas, one can find small, well hidden murals that portray Pikmin. There are ones that show just a Pikmin by itself, and others that show Pikmin near their specialty, such as Red Pikmin near fire, or Rock Pikmin breaking a crystal nodule. Though in Pikmin 3 they are merely Easter eggs, in Pikmin 3 Deluxe they are acknowledged in-game, and photos of them are required for some badges.

Scattered throughout the game are several instances of text written in a language that can only be assumed to be Koppaite. These messages are written in English, and their purpose varies, but are kept a secret to most players, since they are impossible to decode unless the player knows the cypher. Each character in the Koppaite language actually matches up with one or two Latin letters, which is what makes decoding possible.

In some circumstances, the leaders or Pikmin can sing or hum a small theme:

In the Pikmin viewer menu, by selecting a Pikmin and swiping up so its information page takes up most of the screen, the 3D model of the Pikmin at the top can be interacted with. By swiping left and right on the Pikmin, it can be rotated, and rotating it too fast will make it make a sound effect. By tapping the Pikmin, it will do a special animation. This animation depends on the type of Pikmin, and some types of Decor Pikmin have special animations that replace the usual one for that type, and often vary slightly between Pikmin types. Here is a list of standard animations for each Pikmin type:

Here is a list of special animations performed by certain Decor Pikmin types:

The Purple Pikmin and Winged Pikmin standard animations are based on the ones in their introduction cutscenes in Pikmin 2 and Pikmin 3 respectively.