From Pikipedia, the Pikmin wiki
(Redirected from Electric gate)
Jump to navigation Jump to search 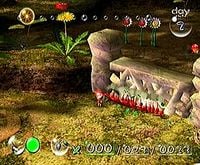 A simple white gate in The Forest of Hope.

Gates (also called walls) are obstacles in all Pikmin games that block paths to other areas. They are found in a number of different forms, which require different strategies to overcome. In general, they can be destroyed by Pikmin: a leader just needs to order them to work on the structure. As time passes, a gate that is being destroyed becomes weaker in distinct stages, before finally being taken down with the standard "task complete" sound effect. The length of time it takes to demolish a gate depends on its type, and the number and types of Pikmin working on it. Some gates require specific Pikmin types to overcome.

In Pikmin and Pikmin 2, gates have three stages, and when passing from one to the next, they sink lower to the ground. Pikmin 3 eschews this for a more realistic look, where the gates show visible damage.

Bramble gates are the most basic type of gate in Pikmin and Pikmin 2, being replaced with dirt walls for the third game. Any Pikmin type can damage a bramble gate. There are two types of these gates: white and black. Black gates are harder to break down than white ones. These can also be found with gas pipes within, requiring White Pikmin to take them down.

In Pikmin, white gates can also be destroyed with two bomb rocks, and black gates require four. The exact health values are not very rigid, however – the gate that encloses the Emperor Bulblax's arena on The Final Trial is surprisingly frail. In Pikmin 2, normal gates above ground have between 10000 and 43000 hit points. They tend in general to be much sturdier than the randomly generated ones in caves (100 - 12800) and Challenge Mode levels (1 - 4000). For comparison, a Red Bulborb has 750 hit points. 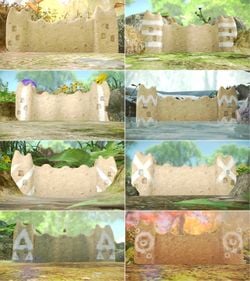 The 8 designs of dirt walls in Pikmin 3 Deluxe.

Dirt walls are sandcastle-like gates found in Pikmin 3 and Hey! Pikmin. They are the most basic type of gate and replace bramble gates from the first two games. They break down and fall apart as opposed to sinking into the ground. These types of gates can be destroyed by any Pikmin type; however, some of these walls are found partially or completely submerged underwater, meaning that they require Blue Pikmin to destroy.

In Pikmin 3, Pikmin are more effective at taking one down if they are latched onto it from a throw,[1] but as the layers on the gate peel down, those Pikmin will eventually fall and attack at ground level. For Rock Pikmin in Pikmin 3, throwing them at the wall repeatedly is much faster than letting them lunge on their own, and is in fact, the fastest way to take down a wall using Pikmin.[1] In Pikmin 3 Deluxe however, Rock Pikmin left to attack the wall on their own can take it down fairly quickly.[2] These walls can be destroyed using a single bomb rock.

These types of walls all have the same design in Pikmin 3, but in Pikmin 3 Deluxe, there are 8 different designs of dirt wall with various patterns of white paint on the columns at the sides of the wall. Those designs are: no paint, 3 horizontal stripes, 1 vertical stripe, 2 wavy stripes (all walls with this pattern are found in water), 3 diagonal stripes, an "X" mark, 3 triangles, and 4 circles.

Reinforced walls (also known as stone gates[3]) are, as the name would suggest, less destructible than regular gates. They do not appear in the second game. Pikmin cannot attack these stone walls: if they are told to try, they will just tap their stems at them for a bit, before sighing and giving up. Bomb rocks must explode near them in order to take them down. In Pikmin 3, only three bomb rocks are needed to take one down (aside from one in the Battle Enemies! version of Clockwork Chasm that only requires one bomb rock), but in Pikmin white, gray and black gates, need three, six and nine bomb rocks to destroy, respectively. In Pikmin 3, they seem to be made out of concrete, as pieces of rebar can be seen sticking out of the top. In Pikmin 3 Deluxe, most of these walls have a design featuring thin white lines in the shape of Olimar and some Pikmin.

Electric gates carry electrical current. As such, Pikmin that are not Yellow cannot touch them, under the risk of death (Pikmin 2) or temporary paralysis (Pikmin 3). Other than that, they can be taken down just like any other type of gate.

In Pikmin 2, they resemble a fence made of metal, and sink to the ground as they take damage. All electric gates have exactly 16000 hit-points.

In Pikmin 3, they are made of four fluorescent lamps laid horizontally on top of one another, with each lamp breaking down (and becoming harmless) at each stage of destruction. When the gate is finally opened, all lamps explode. Pikmin cannot grab on to this type of gate – they can only attack from the ground. Bomb rocks cannot be used to damage these gates.

Crystal walls are gate types found only in Pikmin 3, and require Rock Pikmin to break. The gate itself is made of a piece of glass (identified as "crystal") stuck between 2 clamps, and will crack as Rock Pikmin hit it. Once enough damage has occurred, the wall will shatter altogether rather than break gradually or sink in the ground. The cracks are split in quadrants, and once a quadrant has been damaged enough, the whole structure breaks. As such, hitting the same quadrant repeatedly will take the wall down faster than hitting several quadrants. Although uncertain, it appears that all crystal walls in story mode take 24 direct hits to break if the same quadrant is hit every time, and 28 direct hits if a different quadrant is hit each time. Any crystal gate needs 2 bomb rock explosions in order to shatter, regardless of health value. In Pikmin 3 Deluxe, there are 3 designs of this wall: one with the standard dark rusted metal on the sides, one with much lighter rusted metal, and one with rust-free metal.

In a prerelease version of Pikmin 3, this gate was called a "crystallized wall". It may have been changed at some point in the game's development to shorten and simplify it.

Bamboo gates are gates made out of bamboo sticks, and are found only in Pikmin 3. They require Winged Pikmin to get use but, unlike other gates, these cannot be opened permanently. Each of the five sticks has a pink handle on top, which requires two Winged Pikmin in order to be lifted – as such, ten Winged Pikmin must be issued to lift the entire gate. Until they are called back, they will keep the gate in this opened position, allowing leaders, Pikmin, or even enemies passage underneath. No more than 10 Winged Pikmin can lift a single gate, and once they are told to return, they will close it again. If less than all the Winged Pikmin get called back, the gate will fall and any remaining Pikmin will struggle to hold up the gate. If an item gets stuck under a closed bamboo gate, it will glitch back and forth while remaining stuck in the gate. It will be freed if the gate is lifted back up, however.

One of the brick walls in the Distant Tundra, destroyed.

Brick walls are rare walls in Pikmin 3 that are destroyed by pushing iron balls down a slope. They cannot be locked-on to, as there is no other way to destroy them. There are two in Story Mode, both in the Distant Tundra:

Cinderblocks are indestructible walls in Pikmin 3, one of which acts as a gate. Upon rescuing Louie from the Scornet Maestro, a cinderblock in the Garden of Hope is blown up, allowing access to the southwest half of the area and the next part of the story. Outside of this case, cinderblocks are used in various Mission Mode and Side Stories stages to block off parts of the area, and five are used as background scenery in inaccessible parts of the Garden of Hope. 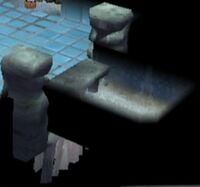 The submerged part of the gate is still visible beneath the map.

In the first two games, a visual glitch that occurs with certain gates allows them to remain visible underground when parts are submerged. Once the entire gate has been torn down, everything appears normal again. This is best seen underground in Pikmin 2, and in The Forest Navel in Pikmin. In the latter case, it is a simple black gate near a Fiery Blowhog and a Pellet Posy growing in a pool. 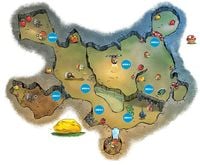 Concept art for Tropical Forest, with a bramble gate visible between "Area 3" and "Area 4".