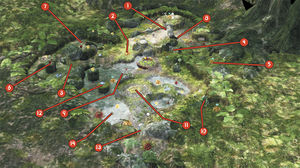 An overhead view of the Shaded Garden.

Shaded Garden is a Mission Mode stage in Pikmin 3. It contains terrestrial and aquatic sections, similar to the Garden of Hope. The stage is playable in the Collect Treasure! and Battle Enemies! modes, and has a remixed version, Shaded Garden Remix.

All three leaders start in an area slightly east to the center of the stage. Nearby are 2 Cupid's Grenades and a group of planted Blue Pikmin. Further east is a spiral like tower holding some planted White Pikmin, a pile of Nuggets, and some more Cupid's Grenades. Southwest of this area is a small group of Dwarf Bulborbs and a Sunseed Berry, guarding an alcove with some more planted White Pikmin. Further southwest is a group of planted Rock Pikmin and another pile of Nuggets. North of that area is a geyser encased in crystal to get back to base, and a crystallized Golden Sunseed, which should be broken for easy access to the northern part of the area.

North of the SPERO is another Dwarf Bulborb, surrounded by a Golden Sunseed, a Cupid's Grenade, and another pile of Nuggets. Further northwest is a small group of planted Blue Pikmin, and a spiral-like structure similar to those found in caves in Pikmin 2. Past that is a dirt wall, allowing access to another small area with more planted Blue Pikmin and many different berries, such as some Golden and Cupid's Grenades. From here, the spiral like structure can be climbed, allowing access to more Blue Pikmin and more treasures.

South of that is a dirt wall, closing off the main body of water in the area. From there, a Golden Sunseed, a pile of Nuggets, and a Cupid's Grenade are immediately in sight. Next to the Cupid's Grenade is a Desiccated Skitter Leaf. Further west in the body of water, a Face Wrinkler, Insect Condo, Golden Grenade, and another Desiccated Skitter Leaf are present. By going south, the player is back on land, and nearby a Skutterchuck and a small alcove blocked off by a crystal, which holds a Bulborb.

Further down the path is another Skutterchuck, another pile of Nuggets blocked off by a Large Cystal, and some pools of water which hold various treasures. By going north, there is a raised area, at which the player can throw a leader across to a nearby stump holding more planted Blue Pikmin. Further west is a group of planted Rock Pikmin, a Skutterchuck, and a Sunseed Berry in the water. Beyond the Skutterchuck is a dirt wall leading back to the area where the group of Dwarf Bulborbs are located.

The player starts off as Alph near the Red Onion. Nearby are 8 planted Red Pikmin. Further north of the Onion is a Fiery Blowhog. Past that is a small room closed off by a crystal. Inside that room are 2 Pyroclasmic Slooches. To the west of that is a small pool of water with 2 Wogpoles. Nearby the pool is a ledge with a few bomb rocks, as well as a small alcove with a large cluster of Skitter Leaves. Further down the path are a few Yellow and Red Spectralids, with a Peckish Aristocrab guarding them. Further south are 2 Desiccated Skitter Leaves guarding a dirt wall to the Rock Onion.

Near the Rock Onion is Charlie, along with 9 planted Rock Pikmin. Nearby is a small alcove with 1 bomb rock, and 2 Desiccated Skitter Leaves. Next to the Skitter Leaves is a geyser encased in crystal. A dirt wall is further down the path, guarding a Yellow Spectralids and a Bulborb. Further down the path are many more Desiccated Skitter Leaves. On top of the spiral structure is a Red Spectralids. Near the spiral is a large crystal creating a shortcut to the Blue Onion.

Nearby the Blue Onion is Brittany and 9 planted Blue Pikmin. The geyser encased in crystal leads up to the Blue Onion. East of the Blue Onion are 3 Skitter Leaves and a Yellow Spectralids. Further east is a Fiery Blowhog guarding a dirt wall enclosing an elevated area. Inside that area is another Bulborb and another Spectralids. By following the slope, the explorers can reach an high area with more Spectralids. Across from that is a crystal wall closing off the large body of water.

In that body of water, there is a Toady Bloyster immediately within range. West of that is a small cluster of Wogpoles. East of that is another Wogpole, and further north is another Peckish Aristocrab. The Aristocrab is nearby the Fiery Blowhog near the Red Onion where the mission starts.