The Insect Condo is found inside a Fiery Bulblax in sublevel 5 of the Dream Den. The player should be sure to defeat the Red Bulborbs and Blowhogs nearby, because they may attack the Pikmin while they're carrying the treasure. 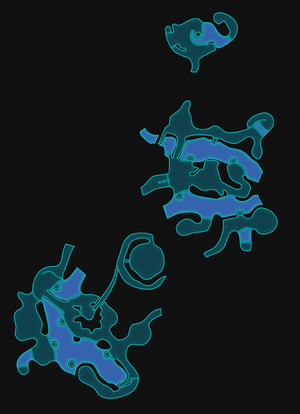 In Pikmin 3, the Insect Condo is inside a Burrowing Snagret, which is in an arena just past an electric gate in Twilight River. After defeating the Burrowing Snagret, the paper bag to the northeast of the arena should be pushed, creating a quick route back to the ship. Along the route are two Desiccated Skitter Leaves, which will eat the carrying Pikmin if not defeated.

“This sumptuous nugget may look delicious, but internal scans indicate a parasitic infestation! The ship can't stand to even look at these pests, let alone store them. But I had to put my foot down on this one.”

“Awash in color and sugars, this item makes an ideal home for many insect species. I am sure this is valuable to the scientific community, but it has little value as a commodity.”

“That smell! I can't tear my nose away from that smell! I'd dive right in and start eating, but something about this name the computer supplied makes me just a touch suspicious about what's going on inside this thing...”

“I'm having difficulties prying my nose away from the crisp, sweet scent. I'd dive in and devour, but something about the name leads me to suspect our ownership of this specimen may be contested. I won't trespass until we've conducted a proper survey.”