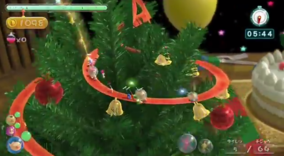 The leaders sliding down the ribbon that runs around a decorated tree in the Fortress of Festivity.

Fortress of Festivity is a Mission Mode stage in Pikmin 3. This stage is Christmas-themed, taking place on a table covered in various festive decorations, including a small Christmas tree with a spiraling ribbon attached to it, which the Pikmin can slide down. The stage is playable in the Collect Treasure! and Battle Enemies! modes. In the original Pikmin 3, it was released in the 1.4.0 update for free, while the other four stages in the third row of the Mission Mode menu were made purchasable via the eShop. In Pikmin 3 Deluxe, it can be unlocked in each of the 2 modes by completing the first 10 stages in that mode.

The player starts in the middle of the stage with the SPERO and presents with various fruits on it. On the presents are 2 Cupid's Grenades, 2 Slapstick Crescents, and a total of 11 Red Pikmin. Nearby the start is a bamboo gate and a geyser blocked by a crystal, which leads to a patch of 10 Rock Pikmin. Further down this path is a Bug-Eyed Crawmad in the middle of a pepperoni pizza. To the west of the pizza is a plethora of fruits, with a Slapstick Crescent, Seed Hive, Insect Condo, and a Zest Bomb. There is a Zest Bomb further up on a high stack of presents that requires Yellow Pikmin to reach.

Nearby are 5 Blue Pikmin. Next to them is a pile of 50 Nuggets, with a Zest Bomb laying on a present. West of that is a huge plate filled with water. In this plate are 10 Cupid's Grenades. There is a dirt wall nearby, which leads to a path further north of the area. Eventually, players will reach a split path. To the west is an room fenced off by an electric gate. Inside the room are 2 Insect Condos and 1 Seed Hive along with 4 Yellow Pikmin. There is a geyser nearby, which leads to atop of some presents. Here, there are 4 Golden Grenades and a pile of 20 Nuggets along with 5 planted White Pikmin. Also nearby is a geyser, which, in a convoluted series of bouncy mushrooms and sliding around the Christmas tree, leads atop of a cake in the northeast corner of the room. This cake has 5 Cupid's Grenades and a bunch of Dusk Pustules. There is also a series of Bouncy Mushrooms here which can lead to obtaining the Rock Pikmin.

Back at the crossroads, going east will reveal a giant blue present. Atop the present are 3 Purple Pikmin along with 3 Golden Grenades, with a Burgeoning Spiderwort nearby. To the north of the present is a dirt wall. Past it is quite a lot to explore. To the north is a small path, with a pile of Nuggets and an Insect Condo. But directly ahead are two Seed Hives, two Insect Condos, and a Slapstick Crescent. Before that is a crystallized geyser that leads back to the starting area. Beyond all that is a large pile of Nuggets nearby the cake.

Curving around south, there is yet another Seed Hive and Insect Condo, along with a slightly out of place Lesser Mock Bottom. Further south of that are 10 planted Winged Pikmin. To the east of that is a Seed Hive and a clump of Dusk Pustules, all of which are fairly high up, requiring Yellow or Winged Pikmin. Going even further south, there is a pile of Nuggets. To the east of it in a small corner of the stage are the final 5 White Pikmin.

Switching back to Alph, use the 5 Blue Pikmin to begin collecting the Cupid's Grenades in the bowl of water. Brittany, with the remaining Red Pikmin and Purple Pikmin, can begin collecting the large fruit located in the starting area. After all the Pikmin are helping retrieve fruit, have Brittany travel over to the electric gate to meet Charlie. With Alph and the remaining Pikmin at base, clear out all nearby fruit, including the other 5 Cupid's Grenades submerged in water. Set a handful of Red Pikmin to start chipping away at the nuggets. After the starting area has been cleared out, Alph should travel to the electric gate as well with 3 Purple Pikmin and 4 others in tow.

With Brittany, regroup with Charlie and throw Charlie over the small present besides the electric gate, allowing him to access the Yellow Pikmin. Have the Yellow Pikmin begin working on the electric gate, and then ride the geyser up to pluck the White Pikmin. Set those White Pikmin to begin retrieving the nuggets atop the highest present. The 3 Red Pikmin should have taken down the dirt wall by now; with Brittany, have the 3 Red Pikmin carry back each of the Golden Grenades on the large central present. As soon as the electric gate is taken down, take both Alph and Brittany inside. Have Alph's 3 Purple Pikmin carry back each of the large fruit behind the gate. Bring the 5 Yellow Pikmin with you.

After riding the geyser up and joining Charlie again, have 4 other Pikmin take back the 4 Golden Grenades, then take the geyser up to the Bouncy Mushrooms and the Christmas tree. Upon reaching the cake, regroup with your squad and pluck the remaining Yellow Pikmin. With the 15 Yellow Pikmin, have 5 carry back each of the 5 Cupid's Grenades and have the other 10 start on the Dusk Pustules. The leaders should take the Bouncy Mushrooms to land on a present near the SPERO. With Alph, throw Brittany and Charlie up to pluck the Rock Pikmin. After plucking those, have Brittany throw Charlie to begin plucking the Winged Pikmin atop a present to the right of the bamboo gate. Immediately after getting the Rock Pikmin, take down the two crystallized geysers: one directly in base and one outside of it. After both geysers are taken out, have the 10 Rock Pikmin start on the pile of nuggets at the base of the cake. Then have Brittany make her way to the White Pikmin, which should be done with the pile of nuggets. Have those 5 White Pikmin work on the larger pile of nuggets below. Once the Winged Pikmin have completed the Dusk Pustules, have them carry back the large Seed Hive atop the present.

With Charlie's 10 Winged Pikmin, have him first start on the pile of nuggets. After that has been completed, walk down to the south of the large presents with the Dusk Pustules. Throw the Winged Pikmin at the top of the box; even though they will not land on top of it, they should begin working on collecting them. Afterwards, have Charlie pluck the 5 White Pikmin near the southernmost pile of nuggets, and have them begin working on those nuggets. Alph and the remaining Pikmin at base can begin a cleanup. The 3 Purple Pikmin and 5 Yellow Pikmin carrying the Cupid's Grenades should have returned to base. Throw the 5 Yellow Pikmin onto the Zest Bomb on top of the high present. Once the Winged Pikmin bring the Seed Hive back, have them open up the bamboo gate and begin retrieving the large fruit still left. If there are Yellow Pikmin working on the Dusk Pustules or the Rock Pikmin working on the nuggets, call them to help carry back the treasures. Do not forget the Insect Condo at the northernmost point. Put a few more Pikmin working on the pile of nuggets next to the Insect Condo.

After all the large fruits have been obtained, take all of your idle Pikmin, including the Winged Pikmin holding up the bamboo gate, up to the pizza box to fight the Bug-Eyed Crawmad. Defeat the Crawmad and carry back its spoils to ensure a platinum ranking. The most important objective on this stage is to quickly get access to the Rock Pikmin and Winged Pikmin, to open up the geysers and bamboo gates. As such, begin working on the electric gate as soon as possible, but do not neglect the other treasures close to base either. When fully optimized, the level can be defeated with ample time to spare.

The 3 leaders, Alph, Brittany, and Charlie, start off below the cake, with the SPERO and the master Onion. There are 10 other Winged Pikmin nearby. South of them is a lone Puffy Blowhog. Even further south of it is a Burgeoning Spiderwort plant. Back nearby the Onion is a geyser that leads atop the presents. Right east of the Onion is a room with one Skutterchuck and a Burgeoning Spiderwort. The room is closed off by a crystal wall. To the east of this wall is a present with a few Red Pikmin. Nearby the present is a Fiery Blowhog by a dirt wall and a Watery Blowhog guarding a crystal wall. The larger present in the center has 8 Blue Pikmin on it.

Next to them is the plate filled with water. This time, it is filled with 7 Skeeterskates. To the west of them are 2 Yellow Wollywogs. To the north of them on a present are 10 planted Rock Pikmin. Nearby them is a crystallized geyser which leads up to the cheese pizza. On the pizza, there are now 3 Waddlepuses.

The keychains released using images from the Fortress of Festivity.