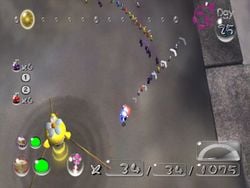 In Pikmin and Pikmin 2, the player has the ability to swarm their group of Pikmin (also known as moving the group[1] or C-sticking) around the current leader. This can be achieved by tilting

Only the Pikmin can be moved around; if the other leader is in the current party, he remains in his place. When the Pikmin group is told to move, it becomes organized in a roughly circular shape, that becomes elliptical the more the group is moving; the distance to the tip of the group depending on the movement order's intensity.

will move the Pikmin group into an ellipse behind the leader, lined up in throwing order.

There are three main ways to issue orders to Pikmin: by throwing them at the object, by moving the group so that they touch it, or by dismissing them on to it. While the group is being moved manually by use of the aforementioned controls, they will interact with objects they touch. The Pikmin must be touching the object for the task to begin, whereas by throwing or dismissing, the Pikmin only need to be near the object.

The other main use of swarming is to prevent the Pikmin from getting close to unwanted areas, such as hazards or sleeping mature Bulborbs.

In Pikmin, when traversing a tight pathway where the Pikmin might fall off, such as the ramp that leads to the top of the moved cardboard box in The Impact Site, the Pikmin can be told to compress into a tight group by rapidly spinning

in the GameCube version or by holding

and rapidly circling the cursor around the screen in the Wii version. Quite a bit of dexterity is required in order to group the Pikmin and move through the path, so it is recommended that only a few Pikmin are taken at a time.

Swarming can also be used to group the Pikmin closer to the leader, which allows the player to throw Pikmin much more rapidly. If the group is not moved, the Pikmin to be thrown will have to travel from the group to the leader's hand, which costs some time; moving them so that they're always next to the leader reduces this delay.

Visually, there are no effects in the GameCube games, but in the New Play Control! versions, some arrows are cast from the leader to the cursor; the cursor also flashes yellow and oscillates in size.

is tilted on the GameCube, or the father the cursor is in New Play Control! versions. In addition, for the New Play Control! remakes, if the Wii Remote's speaker is not mute, this fanfare will play through it instead of from the television. Bizarrely, in Pikmin 2, the closer the movement direction is to the area's North, West, South or East, as indicated by the radar, the faster the "maximum speed" is.