Ujadani (ウジャダニ?, lit.: "Swarm Mite") are small creatures in Pikmin 2 that appear in the Wistful Wild in intervals of 30 days, on days 31, 61, 91, etc. The name comes from their e-Reader card. They are very small, orange bugs with a 5mm body length that scurry about in large swarms, and are not documented in the Piklopedia. Upon closer examination, they appear to have tiny scuttling feet before their bulbous backs. Two swarms of 70 each can be found on the days they appear. One of the swarms is located near the entrance of the Hole of Heroes, and the other is in the black stone area to the right of the black gate leading to the Dream Den, on the edge of the clearing of Creeping Chrysanthemums. Since they appear so rarely, some players go through the game without knowing of their existence.

The creatures can be attacked by Pikmin, similarly to the way they smack at rubble and nectar weed, right down to the fact that they do it on their own accord even if they are following a leader. Each time one is killed, it has a high chance of releasing nectar or spray drops. This makes the secret bugs the best source of sprays and nectar in the game. Non-White Pikmin are affected by the poison the swarms release when attacked, which acts like any other instance of poison in Pikmin 2. The insects rarely attack, however, so it's possible to beat all insects without any non-White Pikmin being poisoned.

According to game files, Ujadani are technically obstacles that regenerate on day 1 of every 30 day period. Although the period technically starts on day 1, the Wistful Wild is not accessible on the first day without some form of hacking, so this cannot be observed through normal means. Contrary to popular belief, they do not stop appearing after day 301. This myth must have stemmed from the rumors that were discussed after the game was released, which stated that the save files would be deleted after day 300. 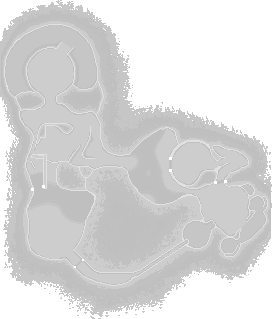 If left alone, each Ujadani scurries about near the swarm's lair. They ignore leaders, but once a Pikmin appears, the Ujadani closest to it will start swarming around it. They either move around the Pikmin, hop around it, shake in place for a bit, or jump onto it and let go after a brief moment. Every once in a while, when performing one of these actions, they release some poison that affects the Pikmin, although this release cannot be seen. These behaviors can be observed by having a leader hold onto a Pikmin, though non-White Pikmin might get affected by the poison and escape the leader's hand.

Because of the massive amount of sprays the group can drop, these bugs are a great opportunity to increase the spray count. Some further strategies may be employed in order to maximize the profit.

There is a maximum number of sprays and nectar that will come out of the insects (roughly no more than 20 blobs in total are allowed on screen); as soon as the Pikmin start popping them and nothing comes out, they should be stopped and everything on the screen should be absorbed; only then should the attack continue. Doing this will produce considerably more sprays: it is possible to obtain approximately 20 of each this way. The nearby Blowhogs, Swooping Snitchbug, and Chrysanthemums can be used to deflower Pikmin, which in turn can be used to suck up excess nectar, seeing as the limit is on the number of drops and not the number of concentrated doses of spray that exist in the level. This allows for more sprays in total, as the nectars can easily reach the limit of 20 blobs themselves.

So many spray drops in one place present the perfect chance to use a glitch which effectively doubles the number of sprays the player can absorb. Though it may take a little extra time depending on the exact method used, it is well worth the effort to squeeze as much profit out of this rare opportunity as possible.

Entering and exiting a cave will make the bugs respawn, meaning the player can obtain their spoils more than once per day. In combination with the previous strategies, a player can reach over 50 sprays in a single day from Ujadani alone. 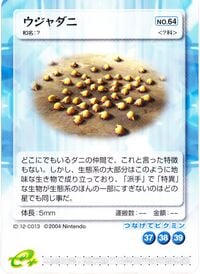 Scan of the e-card.

The e-card has the following text:

Which roughly translates to:

Ujadani
A group of ticks that can be found everywhere, it has no notable characteristics. However, the ecosystem is mostly composed of this sort of simple organism, and that showy, unique animals are no more than one part of the ecosystem is true of any planet.

This creature's English name is never stated, but the Japanese name comes from its e-Reader card, and is a combination of the Japanese words うじゃうじゃ? (lit.: "in swarms") and ダニ? (lit.: "tick"). Its scientific name is not known, but its internal name, ujamushi, is similar to the Japanese name, except ending in むし? (lit.: "insect").