The mockiwi family (キウイモドキ科?, lit.: "Pseudo kiwi family") is a family of enemies found in Hey! Pikmin. All members of this family are bird-like in appearance, with beaks, scaly looking feet, and large, round eyes. The Mockiwi family has 3 known members, all of which were introduced in, and are so far exclusive to Hey! Pikmin.

Every enemy in this family is in the Pseudoactinidia genus. 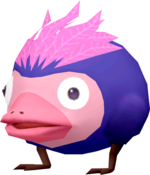 The Crested Mockiwi is an enemy exclusive to Hey! Pikmin. It resembles a normal Mockiwi, although it is slightly larger, with a darker colored beak, pink face, purple body and, as its name would suggest, a large magenta crest on its upper body. Its crest is the only weak spot it has, unlike the Mockiwi's entire upper body. It acts like a regular Mockiwi, usually wandering around a set area and giving chase to any potential prey that comes near it. It has more health and moves faster than the a normal Mockiwi. It also has the ability to suddenly charge towards the player, which can be devastating should it catch the player off-guard. 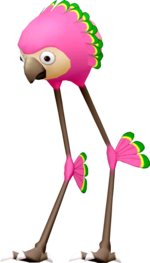 The Elongated Crushblat is a creature appearing in Hey! Pikmin. Despite its name, it is not related to the crushblat family. It is the only docile member of the mockiwi family, simply wandering around a small area and taking no notice of the player, although it can cause damage via crushing should something get in its way. It is a large, birdlike creature, resembling a parrot or flamingo, with a bright pink body, a pale face, long brown legs with pink feathery joints, and many smaller green and yellow feathers decorating its body. It will not take damage if hit in the legs, and must instead be defeated by attacking its joints, which will cause it to lean over, exposing its body. It should be noted that its beak is more pointed than the flat beaks of most Mockiwi.

The Mockiwi is an enemy in Hey! Pikmin. It is a large, yellow, bird-like being with a body resembling that of a grub-dog. It has a large, flat beak, a yellow body with a paler yellow face, and small vestigial wings. It wanders around a small area, attacking any potential prey that comes into view. When not provoked, it sniffs the ground searching for food and clucks in a manner similar to a chicken. It is the most iconic enemy in Hey! Pikmin, being present in promotional art, and on the game's box and title screen.

The family's name is likely derived from the words "Mock" and "Kiwi", likely referring to their birdlike appearance. This name may also suggest that they are not, in fact, birds, despite the notable resemblance. In the family's scientific name, the genus Pseudoactinia would imply that they imitate sea anemones, with "Pseudo" meaning not genuine, and "Actinia" referring to a real world genus of sea anemone, although that similarity is probably just coincidental.