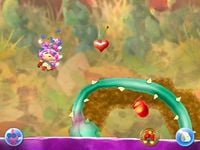 Hydroe bramble in Bed of Fallen Leaves.
Warning: the following article or section contains major spoilers about a detail of the final boss in Hey! Pikmin.

Hydroe bramble are green stalks with thorns that can be found in some areas in Hey! Pikmin. These serve as obstacles that either block the player's path, or pose a passive threat, since they kill any Pikmin that touch them, and can hurt Captain Olimar. Each one can have a different behavior, between staying stationary, advancing and stopping, or moving in and out of place, and each one can also move in a straight line or a curvy pattern.

Although their name and origin is never explained by the game, some facts hint that these these brambles are controlled by the Berserk Leech Hydroe. The plants become more common as the player approaches the later sectors. In the final sector (The Final Stretch) and area (Fragment of Hope), there are several of them, they try to attack the S.S. Dolphin II's pod as it flies away, they block the path behind Olimar, closing him in to the arena in front of him, and are also very quick and aggressive. Finally, the theme of the vines resembles the theme of the final boss.