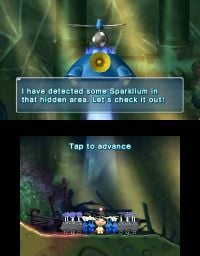 Discovering the secret exit in Below the Ice.

Normally in Hey! Pikmin, exploration of each area starts at one point and ends at another, and when an area is finished, the area whose letter comes next in the alphabet becomes available. But some areas have a secret exit, usually behind a hidden path or challenge. If the player finds the S.S. Dolphin II's pod at the secret exit, it will comment on how it found an extra area with some Sparklium, and will recommend Captain Olimar to go check it out. At the area selection menu, the path that opens connects to an "X" area, instead of the next letter of the alphabet. When this alternative area is completed, it leads to the letter after the area that the player skipped, meaning that regardless of the player taking the regular path or the secret exit, they will have to complete the same number of areas to reach the sector's boss area. The following is a list of areas with secret exits, and where they lead to.