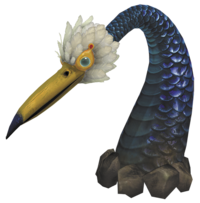 The Burrowing Snagret is a boss present in all three games.
Warning: the following article or section contains major spoilers.

Some types of enemies are larger or stronger than most, and appear less frequently, often in prominent places. These are known as bosses (巨大生物?, lit.: "Huge Creature"), and normally only one or two of each type appear in the entire game. Given that battles against them are usually more complex, the rewards tend to be more significant, such as a large number of Pikmin seeds, Pokos, or an important story-related item.

Through each game, the definition of a "boss" has become progressively clearer. In Pikmin the game seldom makes a distinction between a boss and a regular enemy. In Pikmin 2, bosses are given different slots on the Piklopedia and a specific musical theme, with some having unique ones. In Pikmin 3, bosses are clearly identified as such by the game itself,[1] and are divided between main bosses and mini-bosses, even having unique cutscenes and musical themes. They need to be defeated to progress with the story. Hey! Pikmin also has bosses with unique cutscenes and music, and defeating them is necessary to advance to the next sector.

In Pikmin, bosses are only defined within the game's internal files, and it is never explicitly stated in the game which enemies are bosses. The following four enemies are categorized as bosses:

Oddly, Candypop Buds, geysers, and Iridescent Flint Beetles are also technically bosses, though this is likely due to their unique nature as enemies. As a result, approaching a Candypop Bud or a geyser will change the music to the enemy battle variant.

Three other enemies are often considered bosses by fans due to their rare appearances and boss-like level of difficulty, even though there is nothing in the game that technically distinguishes them:

In Pikmin 2, there are twelve bosses, and most use a special musical theme for fighting against them. Three use their own unique theme, specifically: the Titan Dweevil, the Waterwraith, and the Giant Breadbug. They also appear in a larger bubble on the Piklopedia's listing. Bosses in this game can be found in specific spots in the overworld areas, but in caves, they are usually presented as the final challenge in some caves. The following are listed in Piklopedia order, which is roughly the order they are intended to be encountered in:

There are no mini-bosses in this game, though the Burrowing Snagret and Emperor Bulblax have literal mini variations with lower HP, which appear in places where they aren't fought as final bosses of a cave. The Empress Bulblax also has a lesser variation with lower HP and fewer attacks than the "primary" version. Late in the game, earlier bosses are sometimes rebattled and act as mini-bosses of a cave, such as in the Hole of Heroes. Additionally, the Fiery Bulblax, which may have originally been intended as a boss, is occasionally considered a mini-boss by fans, as it is a relatively difficult enemy.

In Pikmin 3, the six main bosses are clearly labeled by the game, and their battles are considerably more complex than with most other enemies. These bosses can be re-fought in special Mission Mode stages. They normally have clearly defined vulnerability and invulnerability phases, commonly attacking during the latter. Main bosses will not restore their health as the days go by, and their corpses will also last until the next day, but not any longer. Every one that is defeated drops an important object to the progression of the story. Since these bosses are meant to be fought with clear phases, the game may sometimes lock their health to a certain point, and only let the Pikmin damage it further after it moves on to the next stage. The following is a list of bosses in this game:

Mini-bosses appear in Pikmin 3, distinguished by a different music theme – a remastered version of the boss theme from Pikmin 2. In story mode, these do not give out something plot-critical when defeated, and instead drop a fruit. Unlike the main bosses, their health will be reset at the start of a new day, and their corpses last only for the day they were defeated on. The following are mini-bosses in Pikmin 3:

In addition, the Calcified Crushblat, Peckish Aristocrab, and Spotty Bulbear are sometimes considered mini-bosses by fans due to their difficulty, rare appearances, and the fact that they protect a fruit or drop one when defeated, but they do not have the mini-boss theme.

The final day of Olimar's Comeback, The Ship Restored, has a unique boss fight against golden variants of the Baldy Long Legs and Shaggy Long Legs (the latter with larger feet). This fight has unique battle music.

Hey! Pikmin has 9 enemies that are clearly bosses. They are fought on the final area of each sector, and have their own cutscenes and music themes. They all drop a large treasure when defeated, which needs to be collected before the S.S. Dolphin II unlocks a new sector to visit. When fighting bosses, the player must exploit their movements and actions to find an opening, where they can finally strike. Since the bosses need to be fought in a minimum number of cycles, the game will lock the creature's health and won't allow the Pikmin to cause any further damage until the next cycle is entered. The following are bosses in Hey! Pikmin, ordered by sector:

When fighting bosses, the music of the area or cave is changed to a different theme that lasts for as long as all bosses in the vicinity are alive. In Pikmin, this is only the case for the Beady Long Legs and the Emperor Bulblax, with each one having their own theme. In Pikmin 2, a global boss theme exists, and plays whenever a living boss is nearby. This theme changes dynamically with the events happening in the fight. The following bosses have their own specific boss themes: Waterwraith, Giant Breadbug, and Titan Dweevil. In Pikmin 3, two boss themes exist – one for the major bosses and another for the mini-bosses. The exceptions to this are the Vehemoth Phosbat and the Plasm Wraith, which have their own themes. The mini-boss theme is a remastered version of the Pikmin 2 boss music. In Hey! Pikmin, each boss has a unique musical theme, and these themes do not dynamically change.