Mushroom challenges are a feature of Pikmin Bloom, unlocked at level 15. Mushrooms of various colors and sizes appear around the world, and the player can send a group of Pikmin to attack them. Multiple players can join a challenge, and participants will receive fruit and a postcard as a reward, and a score that measures how well they did.

The amount of Pikmin that can be sent on a mushroom challenge by a player will increase over time based on the player's level, starting at 10 Pikmin. The mushroom challenge selection screen lets the player choose which Pikmin to send, and the strength value of the selected Pikmin can be seen in the top left corner. The higher the strength, the faster the Pikmin will be at completing the challenge. 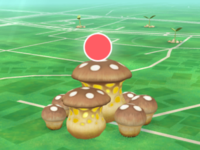 A normal brown mushroom on the map screen. The red circle indicates its health.

Mushrooms grow at points of interest in the real world, similar to Big Flowers. They can only be seen and interacted with when they are less than 600 meters away from the player. After the mushroom is destroyed, it grows back in the same location 5 minutes later, without any input. The mushroom type that grows is randomized.

Mushroom health appears to be computed by the formula 100 × RoundDown(1080 × scale × (23 + type)), where scale and type are given by the following tables.

The screen that appears when a mushroom is selected.

Selecting Pikmin for a mushroom battle.

When a mushroom is selected, either from the map screen or expedition list, the camera will focus on the mushroom, with a photograph of its corresponding real-world landmark behind it. The screen displays some basic information about mushroom challenges, as well as 5 circles that can be filled with icons of the Miis of the players who have joined the challenge. There is a Join button which progresses to the selection screen.

In the selection screen, the player can choose which Pikmin to send. A list of all the player's Pikmin appears, and by tapping one, it can be added to or removed from the mushroom attacking group. The maximum size of the group depends on the player's level. Pikmin with an advantage against that mushroom type (see the next section) may jump in the list when selected for the challenge. Selected Pikmin also appear in front of the mushroom in the camera view. There is a GO button in the lower right corner; tapping it sends all the selected Pikmin to attack the mushroom.

Winged Pikmin destroying one part of a small pink mushroom.

When the health is fully depleted, the mushroom challenge is cleared. The player is provided with their score, the time it took to destroy the mushrooms, and a star rating, followed by the Pikmin bringing a postcard about their challenge and a small number of shiny fruits to be given to the player, providing them with nectar of an uncommon type. Each Pikmin that was sent on the mushroom challenge also gains some friendship (though this actually happens at the start of the challenge, not the end).

When the player is selecting Pikmin for the mushroom challenge, a power value appears in the top left corner of the screen. This shows how strong the selected squad is against that mushroom. Adding a Pikmin will increase the value by some amount. This amount depends on the type of Pikmin, whether it is a Decor Pikmin, its maturity, its friendship, and the color of the mushroom being attacked.

Added to the base attack power is a value for whether the Pikmin is a Decor Pikmin or not.

Added to the total so far is a value for the Pikmin's maturity.

Added to the total so far is a value for the Pikmin's friendship.

Finally, added to the total so far is a value to represent the Pikmin type's strength against the type of mushroom being fought.

Note that the system is not fully understood and that there are likely errors in the description above.

The amount of time it takes to destroy a mushroom (in seconds) is calculated by taking the health of the mushroom, dividing it by the total attack power of the Pikmin attacking the mushroom, and multiplying it by 100. For example, a normal-size mushroom with 397,400 health, attacked by a group of Pikmin with 450 attack power, should take 88,311 seconds to destroy, or 1 day, 31 minutes and 51 seconds.

Although the game presents damage as something dealt by each individual attack, each Pikmin hit actually does as much damage as it needs to decrease the health of the mushrooms at a linear rate such that they are fully destroyed at the calculated time.

At the end of a mushroom battle, the game gives the participants a score and a star rating. The score is equal to the total strength of all Pikmin in the battle, plus a time bonus. Star ratings range from 1 star to 4 stars, and depend on the final score. The score required for each star rating depends on the type of mushroom, and is displayed before joining the battle and after the battle ends.

Time bonus intervals are determined by the duration each of a mushroom's star rating attack requirements would take to clear the battle.

When a battle has finished, the bonus is determined by the closest equivalent longer than the actual time taken to complete the battle.

For example, a small purple mushroom's breakpoints would be:

To demonstrate: three players begin a small purple mushroom together, clearing the battle in less than 1 hour, 5 minutes and 45 seconds. As a result, they will also be granted a 20% bonus to their score. But if one of the players joins right before the end of the battle instead, the battle now taking 1 hour, 44 minutes and 20 seconds, only a 15% time bonus will be awarded.

Once a mushroom battle is complete, a postcard and some fruits will appear, and the Pikmin the player sent will collect them. Each participant receives the full reward (rewards are not split between participants). If too few Pikmin were sent on the mushroom challenge to carry all the rewards, only some rewards will be collected; the postcard has the highest priority. The fruits received depend on the type of mushroom and the star rating. The following table shows the minimum score for each star rating and the fruits received by reaching that star rating. See the Fruit (Pikmin Bloom) article for information on the amount of nectar each fruit type can provide.

The star thresholds appear to be calculated by the formula (type + shift) × factor, where the type is as in the table in the Mushrooms section, and the shift and factor are given in the table below.

During the Halloween event, from October 24th to October 31st, 2022, all mushrooms became Halloween mushrooms. These mushrooms functioned mostly the same way as normal mushrooms, but had a number of differences: 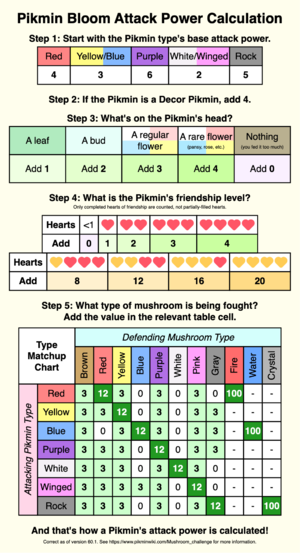 An infographic explaining the calculation of attack power.

When you first unlock mushrooms, you likely won't be able to get very high scores because of the limit on how many Pikmin you can send on them. At this stage, focus on attacking larger mushrooms as they give more rewards for low star ratings, and send Pikmin you want to increase the friendship of, since mushroom battles give a small amount of friendship to participating Pikmin.

After gaining a few levels and increasing your maximum group size, you'll start being able to get higher scores. To optimally prepare a squad for a battle, select Pikmin that are the same color as the mushroom you'll be attacking, and Pikmin with higher friendship values (preferably Decor Pikmin). You can feed Pikmin nectar to raise their attack powers further.

The following changes have been made to mushroom challenges over time: