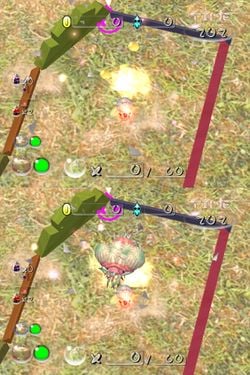 The result of Olimar breaking an egg on a certain frame (top), and on the frame immediately after (bottom).

Randomness is the concept of unpredictable outcomes for events. Whenever an aspect of a Pikmin game can have multiple outcomes which are not determined by anything controllable, the result is randomly picked. Sometimes this is constrained by a decimal value or an algorithm the game uses, all designed to make no two instances of the game the same.

The following is a list of notable elements shared among games that have an outcome up to chance, out of the hands of the player.