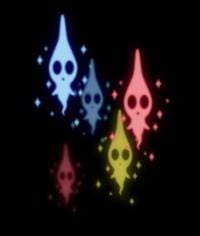 The Pikmin ones roughly resemble a Pikmin's shape; however, they lack a leaf, bud or flower, don't have feet, and are missing any identifying characteristics such as the Red Pikmin's nose. Their appearance is slightly transparent and details vary between the games. In Pikmin, every Pikmin has a blue soul, irrelevant of the color of the Pikmin itself, while souls in all other Pikmin games, including both New Play Control! remakes, are representative of the dead Pikmin's type, differing in color and slightly in shape.

If a Pikmin dies from being thrown into the abyss, it won't release any soul in Pikmin or New Play Control! Pikmin, but it will in Pikmin 2 and New Play Control! Pikmin 2. In Pikmin 3, no soul will be seen ascending from the abyss but it will actually be visible on the radar. No soul will also appear if the Sandbelching Meerslug eats a Pikmin sprout. The fact that souls appear in the radar is particularly important during replays, since they show players where and when Pikmin had died.

In general, Pikmin souls are used as icons in menus and HUDs to represent Pikmin that have died. 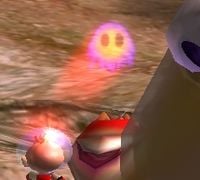 The soul of a recently defeated Dwarf Bulborb.

Enemy souls have a pink-purple color and look like a bubble, and leave a transparent trail behind. Two holes resembling eyes are visible near the shape's center. Bulbmin produce a smaller version of this type of soul when they die. Enemies that do not really "die" do not leave a soul when defeated: this is the case for the Spotty Bulbear and the Gatling Groink, which can revive, and the Ravenous Whiskerpillar, which seems to remain alive even after being defeated. Enemies that die while petrified release a soul, but these "non-dying" enemies do not.

In Pikmin 2 these souls make an eerie sound when ascending. The sound is much deeper, and the soul is much larger for bosses. In Pikmin 3, enemy souls are blue instead of purple, have small white eyes, and have a small "tail". They also burst with an audible pop after a while. An enemy's death in this game means that the carcass is ready to be carried – the enemy cannot be picked up until the soul is actually seen. Due to the way off-camera objects are handled, an enemy's soul will not ascend until it is once again visible on-screen.

Though a Pearly Clamclamp loses its soul when defeated, the creature still seems to be alive afterwards, acting like normal.