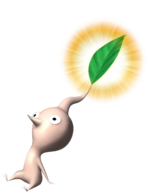 Idleness is the state of a Pikmin that is not doing anything. Pikmin that are idle are sometimes referred to as free Pikmin. It is important for players to recognize when Pikmin are idle, since that means their potential for working on something is being wasted.

When a Pikmin is thrown, dismissed, has finished a task, or is otherwise removed from its current task or its leader's squad, and there are no tasks within a certain radius for it to participate in, it will enter an idle state. While idle, a Pikmin will remain in place and do nothing else, except wait for certain triggers to break it out of its idle state. These triggers include:

In Pikmin 3, Pikmin that already exist idling when the player enters the area do not actually help other Pikmin that are carrying objects. It's not until the player adds them to the group and makes them idle again that they behave as expected. This can be seen easily in River by having Blue Pikmin carry the Astringent Clump past the starting Red Pikmin.

Some Pikmin idling in an early version of Pikmin 3.

Idle Pikmin are distinguishable from active Pikmin by a few key features. Idle Pikmin have a glowing halo of their respective color around their leaf, bud, or flower. They perform a varied array of bored animations, making these halos flutter around noticeably. Additionally, in Pikmin, Pikmin lose their bright coloration when they go idle, instead becoming a light pastel version of that color for the duration of their inactivity. When they are taken out of their idle state, they will quickly regain their bright coloration.

In Pikmin 2, idle Pikmin of all kinds, even Bulbmin, will randomly look around, stretch, groom their stems, flap their leaf, bud, or flower, sit down, or lie on their side.

In Pikmin 3, idle Pikmin of all kinds will do these same actions. Red Pikmin, Yellow Pikmin, Blue Pikmin, White Pikmin, and Purple Pikmin will also occasionally rapidly shake their leaves while sticking their arms out toward another Pikmin, implying communication between two Pikmin. The Pikmin on the receiving end of this animation (in rare cases) may nod their head or leaf in an implied response.

In Pikmin and Pikmin 2, a total counter of idle Pikmin is displayed on the radar screens. This counter is labelled with the text "FREE", and is separate from the squad and Onion counters; in Pikmin 2, the text is also accompanied by an icon showing an idle Pikmin. In Pikmin 3, idle Pikmin are displayed on a separate counter labeled "Idle" on the Pikmin Info screen on the KopPad. Players are advised to keep an eye on these counters, especially nearing the end of each day, as idle Pikmin that are not by an Onion at the end of the day will be left behind at sunset.

In Hey! Pikmin, Pikmin become idle by straying too far away from Olimar's group, provided they've already become a part of it. An idle Pikmin will stand in place, with its stem glowing its respective color. To bring a Pikmin back to the group, touching it or whistling it will do. In this case, the whistle's effect will reach beyond the boundaries of the screen. If an idle Pikmin remains off-screen for too long, it will die, regardless if there are any enemies nearby. Should a Pikmin become idle, the Pikmin counter on the to screen will flash red, alerting the player. After around 30 seconds, the idle Pikmin will die.

While in general, players will want to avoid leaving Pikmin idle, there can be some benefits to doing so.

When doing a dangerous task that only certain types of Pikmin can do, it may make more sense to dismiss all Pikmin except for that type, take care of the task, and then gather everyone again, as opposed to going out of one's way to leave those Pikmin in tasks.

Since idle Pikmin are always on the lookout for tasks to do and don't leave their spot, they can sometimes be used as guards, serving as an obstacle for enemies or an opposing player's team in competitive modes like 2-Player Battle or Bingo Battle. Pikmin can also be left to idle near somewhere where the player knows there will be a task to perform later on in that spot, like beneath a Burgeoning Spiderwort that hasn't grown yet.

In Pikmin 3, leaving 20 idle Pikmin of one type makes them sing along to the area's music as an Easter egg.

In Pikmin 2 and Pikmin 3, leaders can also take on a state that works very similarly to idle Pikmin. When a leader is not in another leader's group, they are just standing in place, sometimes fidgeting about due to boredom. Unlike Pikmin, there is no other physical distinction between a leader that is idle and one that isn't, but since players control leaders directly, it is much more obvious to know which ones are idle and which ones aren't.