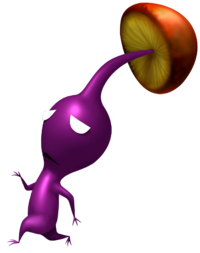 Mushroom Pikmin (キノコピクミン?, less frequently known as Toadmin or Puffmin) is the name given to Pikmin that are under the control of a Puffstool. After being showered with spores, infected Pikmin will make a small aggressive sound and will change in appearance and behavior. This Pikmin status, along with the Puffstool, only appear in the first Pikmin game.

The spores of the Puffstool cause affected Pikmin to morph into a strange form. Their eyes become pupil-less and dead-looking, their skin turns a dark shade of purple and an orange-brown mushroom cap grows on top of their stem. Their type's special physical characteristics, such as the noses, ears and gills are also gone; instead, they receive a small, triangular, slit-like frown.

Mushroom Pikmin each have the same stats as they did before they were infected, including attack power and resistance to hazards. They will follow Captain Olimar when he is in range and attack him while making an unusual sound that resembles menacing laughter. However, they do minimal damage and can be easily shaken off if the player rocks

. Once detached, a Pikmin will lay down for a while, sit down and slowly revert to its original form, after which it'll start obeying Olimar again. If Captain Olimar moves out of range, attacking Mushroom Pikmin stop following him and dance around the Puffstool.

Mushroom Pikmin will not chase after normal Pikmin, however the unaffected ones will chase after Mushroom Pikmin. As this will kill each Mushroom Pikmin if not stopped, this confrontation will simply decrease Olimar's overall Pikmin population. If a Pikmin is called off of battling a Mushroom Pikmin before the final blow, it will convert it back to normal. If any Pikmin are in this state at sunset, they will die like any other Pikmin species. In the New Play Control! version of the game, however, they will actually revert to their original form and become sprouts.

An interesting glitch has been known to occur if Pikmin are knocked to the ground at the same time they are hit with the Puffstool's spores. Upon standing up, the Pikmin will change into Mushroom Pikmin, but their skin will become a pale version of the color they were before they became Mushroom Pikmin, and their mushroom will glow as if they are idle. These Pikmin will turn upon the Puffstool, attacking it as if they are still under the player's control.

It is possible to get the glitched Mushroom Pikmin under the command of Olimar, but it requires a different technique and is more difficult to accomplish. If Pikmin are left idle by the Puffstool and called at the exact moment the creature inverts its cap (just before it blows its spores), the Pikmin may become glitched Mushroom Pikmin and rush to Olimar's side immediately after. These Mushroom Pikmin cannot be thrown, whistled, or dismissed, although they will carry pellets and go into the Onion. When they finish carrying the pellet or get called out of the Onion again, they will revert to their normal form. In The Distant Spring's Challenge Mode stage, rebel Mushroom Pikmin that are smacked by a Mamuta will also revert, and be planted as flower Pikmin sprouts.