From Pikipedia, the Pikmin wiki
(Redirected from Research Pod)
Jump to navigation Jump to search 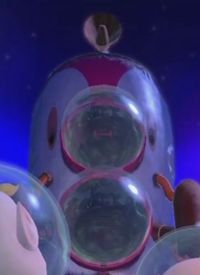 The Hocotate ship (ドルフィン初号機?, lit.: "S.S. Dolphin first model") (usually called simply the ship) refers to Olimar's new rocket in Pikmin 2. It is an old ship, being part of Hocotate Freight since its very beginnings. Unlike the S.S. Dolphin, the Hocotate ship is capable of speech, replacing most of Olimar's in-game speech, and takes on the role of giving advice throughout the game. Olimar makes his opinion of its personality being pompous and quirky known in his notes. It sports two cockpits and a detachable pod, where its speaker is located.

The Hocotate ship is highly greedy and quirky. Sometimes, it makes up lies about treasures in its sales pitches, solely to entice buyers to make money. The Hocotate ship also has an extreme hatred for bugs, which Olimar mentions multiple times in his notes.[2]

The Hocotate ship also laments how it is a machine that cannot do any organic bodily functions[3] and that it lacks friends.[4] Regardless, the ship will often attempt to criticize Olimar on failing to do his duty properly, such as calling him when he has not attempted to use Louie on day 3[5] or pointing out flaws in his argument that the Universal Com is actually a monitor.[6]

The Hocotate ship can store Pikmin and treasures, and will house both White Pikmin and Purple Pikmin once they are found. Unlike the S.S. Dolphin, the leaders cannot check how many treasures have been collected using it, nor can they restore their suit's damage meter, though it is stated in Olimar's notes for the Toxic Toadstool that the ship's reactor can power Olimar's and Louie's life support systems indefinitely, explaining the lack of a 30-day-timelimit that was present in the previous game. Standing in the green light and pressing

before Purple Pikmin have been found does nothing. The ship has two cockpits, and is capable of deep space communication, sending a report each night to Hocotate and receiving mail. To do this it must be in orbit around PNF-404. The ship can dispatch a Research Pod for traveling underground. 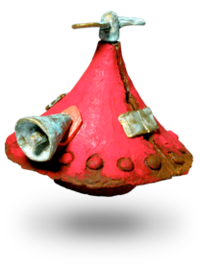 When the leaders go into a cave, the ship dispatches its nose cone, known as the Research Pod, and sends it down to support them. Anything that the Pikmin pick up will be carried to the Pod and stored in its hull until the player leaves the cave. On leaving a cave via a geyser, the treasure worth of these is added to the total.

If the player chooses to leave by selecting the option in the pause menu, the Pod will dispose all treasures and creatures that were collected and return to the surface with the leaders and Pikmin. This will happen automatically if all Pikmin on the sublevel die or both leaders are down, and cannot be stopped without resetting the game. The discarded treasures will be returned to the sublevels they were found in.

After the player pays off the debt and the ship is upgraded, a scratching noise can sometimes be heard when near the equally-upgraded research pod.

When one complete "series" of treasures has been collected, the ship's sales pitches become available. This is an advertisement for the treasure as if it were a product.

“The latest must-have item for all ship emergency-repair kits, this miracle fabric is a lifesaver! Its adhesive power is so great, once it's applied, it can never be removed... Not even surgically!”

After returning to Hocotate, Olimar and Louie are sent back to PNF-404 by the President to retrieve the ship. With the Pikmin's help, its parts are recovered, allowing it to be repaired and brought back to Hocotate. 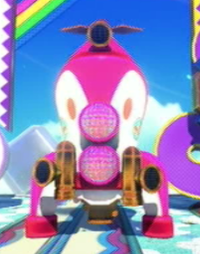 The ship as seen in the Nintendo Land Plaza.

In the Nintendo Land attraction Pikmin Adventure, the ship is the goal point in every level. In the plaza, there is a statue of it called The Ship.

“This is the ship that Olimar piloted during his legendary employment at Hocotate Freight. This one doesn't actually speak, though, which is probably best for everyone.”

“A replica of the ship that Olimar piloted during his employment at Hocotate Freight. This one doesn't actually speak, though, which is probably best for everyone.”

For info about the ship in the "End of Day" Final Smash, see End of Day.

The ship appears in Super Smash Bros. Brawl. During the beginning of a match, Olimar enters the stage in the ship and jumps out to pluck three Pikmin. When Olimar uses his Final Smash, "End of Day", he hops in the ship while Bulborbs cause damage to his opponents. Olimar then crashes down back on the stage, sometimes further harming his opponents. In the Subspace Emissary, Olimar's ship is seen along with a number of other airborne vehicles in the attempt to enter Subspace as well as the beginning of the level Outside the Ruins. In the Great Maze section of the Emissary, it appears in the background as part of the level's scenery. The ship also appears as a trophy and a sticker.

The Hocotate Bomb item in Super Smash Bros. for Nintendo 3DS and Wii U.

For info about the ship in the "End of Day" Final Smash, see End of Day.

The ship retains most of its Brawl appearances in Super Smash Bros. for Nintendo 3DS and Wii U, excluding the sticker and Subspace Emissary.

In addition, it appears in Super Smash Bros. for Nintendo 3DS and Wii U and Super Smash Bros. Ultimate as an item as well. However, it is not the real ship, but rather a bomb disguised as it. When placed on the ground, it lifts off after a delay, and then drops unexpectedly, causing it to explode and damage anybody but the launcher.

Trophy information on the 3DS:

Trophy information on the Wii U: 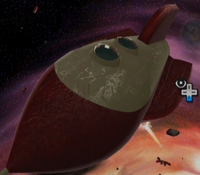 Super Mario Galaxy has two planets shaped very similarly to the the Hocotate ship, one located in the Space Junk Galaxy and the other in the Ghostly Galaxy (the latter cannot be accessed). It is likewise a red, rusted color.

The official name of this ship is quite the conundrum. While simply called "the ship"[10], "my ship"[11], "our ship"[12] or "the Hocotate ship"[13][14] in the English versions of Pikmin 2 and Pikmin 3, in the Japanese games the ship is in fact referred to as "S.S. Dolphin first model". Since the original S.S. Dolphin (ドルフィン号? and this ship (ドルフィン初号機?) both have "Dolphin" in their Japanese name, a number of errors arise. Possibly attributed to different translators unfamiliar with Pikmin or simple oversights, the Hocotate ship is sometimes called "the S.S. Dolphin" when it should be "the Hocotate ship" or "the ship".

For example, in the Super Smash Bros. for Nintendo 3DS and Wii U trophy, it's stated that Olimar boards "the S.S. Dolphin" for his Final Smash, however he is in fact boarding the Hocotate ship.

An interesting possible oversight is found in Pikmin 3: in the Secret Files Olimar states that he is the captain of the S.S. Dolphin – normally players would assume that he is talking about the original S.S. Dolphin from the first game, however knowing this information it becomes apparent that he could in fact be talking about this ship. This explains why in Louie's secret file he presents himself as a crew member of the S.S. Dolphin. It makes more sense to assume that Olimar is talking about being captain of the Dolphin he is currently piloting and not the one that was sold and is no longer his, and for Louie to consider himself a crew member of the only Dolphin he has boarded. However if this is true, Pikmin 3 would be the first time the Hocotate ship is referred to as "S.S. Dolphin" by the characters, mainly Olimar, possibly meaning that the way they refer to this ship was retconned in Pikmin 3. If this is the case, the mistake in the Secret Files comes from the localization's side. If they were in fact talking about the original S.S. Dolphin then the mistake comes from the Japanese version, given that Louie has never boarded the rocket from the first game in the series.

There are other times when the ship is referred to in Pikmin 2, but none of those end up giving it a proper name. In the manual, it is referred to as "the old ship"[15], "your ship"[16], "the ship"[17], etc. In the pause menu in Pikmin 2, the numbers of stored White and Purple Pikmin are listed in a section called "Rocket". In Super Smash Bros. Brawl, a non-canon game, the trophy for the rocket calls it "Hocotate Ship", although the "S" is uppercase.

Other names given include:

Because of how hard it is to know the ship's canon name, most fans call the ship "Hocotate ship", "Hocotate Freight ship", or "the ship", depending on the game, the version, and their own preferences.

As a sticker in Super Smash Bros. Brawl, the vessel is referred to as "Olimar and Louie's Ship". In Super Smash Bros. for Nintendo 3DS and Wii U, the ship is made into an item, but is called "Hocotate Bomb" instead. This is naturally just the name of the item itself, and not the ship in the Pikmin games.