Super Smash Bros. for Nintendo 3DS and Wii U

From Pikipedia, the Pikmin wiki
(Redirected from Super Smash Bros. for Wii U)
Jump to navigation Jump to search 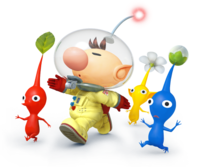 Official artwork of Olimar from the Super Smash Bros. for Nintendo 3DS and Wii U website.

Captain Olimar returns as a veteran fighter, retaining much of the moveset and characteristics he had in Super Smash Bros. Brawl, despite being lighter in this installment. Most of his attacks involve using his Pikmin, which are killable, and if none are nearby, those same attacks will fail. Different Pikmin have different properties. The major difference between this game and Brawl is that here, Olimar may only have 3 Pikmin with him at a time, and they are plucked in order.

Olimar keeps many of his standard moves from the previous game. Like every veteran, many moves have gone through a slight adjustment.

Pikmin Pluck: Olimar plucks a Pikmin. However, as stated, he can only keep three Pikmin, and to make the Pikmin use more strategy-based, the Pikmin come in a set order (Red, Yellow, Blue, White, Purple, repeat). The Pikmin that is next in line to be thrown has a pointer above its head. In the 3DS version, all Pikmin stay in their leaf stage and cannot develop buds or flowers.

Pikmin Throw: He throws Pikmin, which will latch on and attack, excluding Purple Pikmin, which will just knock the victim back. In general, Pikmin are thrown further than they were in Brawl. In the Wii U version, Pikmin may also carry small items back if thrown at one, such as Pitfalls and Capsules.

Winged Pikmin: Two Winged Pikmin appear and lift Olimar and his Pikmin up. Opposite to his recovery move in Brawl, Pikmin Chain, the more Pikmin he currently has, the worse his recovery is.

Olimar's Final Smash in Super Smash Bros. for Wii U.

Pikmin Order: Just like in Brawl, all wayward Pikmin are whistled back. There are far fewer super armor frames than there were in Brawl.

Olimar maintains the same Final Smash, End of Day, from his appearance in Super Smash Bros. Brawl. However, the ship now plummets downward to the stage instead of falling upright. It has a larger blast radius as well. Finally, the player can also adjust where Olimar lands.

Olimar and Alph as seen on Pic of the Day.

Each Pikmin type has some special properties that, for the most part, reflect the Pikmin in the main series. Olimar can use the Pikmin has a melee weapon, as is the case with most of his standard attacks, to grab, pummel, and throw enemies, or he can throw the Pikmin so that they latch on and strike repeatedly.

Alph was first leaked by a leaker a week prior to the 3DS version's release in Japan. At the time, it was not known if Alph was a new character or an alternate costume.

A few days later, on September 11th, 2014, Masahiro Sakurai confirmed that Alph was an alternate costume for Olimar.[1][2] He functions exactly the same as Olimar, even when it comes to the stage introduction and Final Smash. He, like Olimar, is unable to use Rock Pikmin. Alph's model is slightly scaled-up, making him slightly larger than he was in Pikmin 3 in order to match Olimar's proportions, so that the two costume choices wouldn't impact gameplay.

Olimar retains his red spacesuit from Brawl. His green color has gone through changes, as well has his white one. Alph has pink and green suits based off of Charlie and Brittany, respectively. He also has a red suit that resembles Olimar's.

Like the other characters in the game, Olimar comes with 2 alternate moves for each of his special attacks, as well as exclusive equipment. For the latter, he can exclusively equip "Pikmin" (attack) and "Space Suit" (defense) equipment, and can also equip "Boots", which boosts speed.

Alph and Olimar's aliases in the Boxing Ring.

In the Boxing Ring stage, Olimar's alias is "Veteran Astronaut", and Alph's is "Astronaut in Training" in the US version, and "Novice Explorer, Engineering Pro" in the European version.

Palutena's Guidances are conversations Pit and Palutena can have on the Palutena's Temple stage. These conversations give details about a fighter Pit is facing. The Guidance Conversation regarding Captain Olimar or Alph features Pit, Palutena, and Viridi. It is written below:

Palutena: “Did you know that Pikmin are named after Pikpik carrots, a vegetable native to Hocotate?”

Pit: “Huh. Guess you learn something new every day.”

Viridi: “Enough with the pointless fun facts. Let's talk fighting strategy. Here's what I know about these Pikmin. Red Pikmin are strong! Yellow Pikmin fly high! Blue Pikmin have the mightiest throw! White Pikmin are fastest! Purple Pikmin are heavy and the most powerful! Be sure you remember all this, Pit.”

Palutena: “There are also Winged Pikmin that don't attack you. Numerous Pikmin will weigh down the Winged Pikmin. And that's when you should attack!”

A stage based on the eponymous Garden of Hope is available from the start in Super Smash Bros. for Wii U. For the most part, the layout is identical to that of the Pikmin 3 area, with some changes to make it more akin to a Super Smash Bros. battle arena. One of the key hazards in the area is the Peckish Aristocrab. It scuttles around, knocking down the fragmented teacup and climbing sticks, and knocking back fighters who touch it. Wild Pikmin can fix the damage caused by the crab. Fighters can destroy the teacup, the climbing stick and the bridge. Two elevator platforms also exist.

The Distant Planet stage is present as a Brawl stage in the 3DS version. As a whole, not much has changed from Brawl, aside from some minor changes in the background. Just like in Brawl, the stage seems based off of The Forest of Hope and the Awakening Wood.

The Omega form of this stage takes away all the vegetation and leaves a simple dirt platform to fight on. This form also provides a better view of the background.

The Hocotate Bomb item, with Olimar and Sonic looking at it.

The Hocotate Bomb is a new item in both versions of the game. It looks like the Hocotate ship, and when triggered, it flies up in the air, then crashes back down much like the Warp Star item. However, it should be noted that the bomb will crash down abruptly, giving no indication of when it will drop. The explosion it causes is quite big, and could result in a KO if it hits an opponent. The Hocotate ship is still used for Olimar's Final Smash, End of Day.

The Red Bulborb on a floating platform in Smash Run.

Two enemies from the Pikmin series appear in the 3DS-exclusive mode, Smash Run.

The Red Bulborb appears as an enemy in Smash Run. It is a strong enemy that attacks by charging and biting. It seems to be based off of its Pikmin 2 design, having purple eyes instead of blue, and smoother skin. The Bulborb's attacks have strong knockback and cause considerable damage, making them a formidable foe; arguably one of the hardest. It has a simple charging attack, a biting attack, and even a backwards jumping attack to attack players behind it. It is a semi-rare enemy to find.

The Iridescent Glint Beetle is one of the rarest enemies in Smash Run, only appearing in small caves that are normally out of the way. It will only reveal itself after the player walks over its hiding place. Once it pops out, hitting it will cause it to release golden coin bags.

In the Wii U-exclusive mode Smash Tour, the Yellow Wollywog and Plasm Wraith appear as usable trophies. The Yellow Wollywog trophy nullifies any trap that the user steps on on the board, and the Plasm Wraith trophy will heal the player if they block attacks using a shield, in-battle. An Iridescent Glint Beetle will also occasionally appear on the board, and will drop extra fighters if a player bumps into it. Usually, two of these appear at once.

Trophies are a key part of the Super Smash Bros. franchise, and there are quite a few Pikmin trophies.

A good amount of trophies from the Pikmin franchise are present in the 3DS version, but not nearly as many as the number of trophies in Brawl. They are listed below.

Since the Wii U version featured many more trophies from console games, there are many more Pikmin trophies in this version.

There are 3 Trophy Boxes for the Pikmin series. One is "Space Explorers", which holds all main characters from the Pikmin series, and their spaceships. It also holds the Hocotate Bomb, although it technically isn't a ship. Another is "Pikmin", which showcases the known species of Pikmin. The last is "Distant Planet & Indigenous Creatures" (US) / "Pikmin Enemies" (Europe), which holds all enemy trophies, excluding the Iridescent Glint Beetle. The End of Day trophy is in the Trophy Box titled "Final Smashes 3". The Iridescent Glint Beetle and the pellets do not have a trophy box.

There are a variety of Pikmin-related soundtracks that play on the Distant Planet and the Garden of Hope stages. The tracks are as follows:

Like all other Smash fighters in this installment, Olimar has an amiibo of himself as a fighter. The amiibo has Olimar and one Pikmin of each of the three primary types, and in this game, it serves as a figure player, like all other fighter amiibo. However, Olimar's amiibo can be used in a few other games as well to unlock certain content. For instance, in Mario Kart 8, using the amiibo unlocks a spacesuit outfit styled like Captain Olimar's.