The sporovid family consists of 2 fungi-like creatures with similar characteristics. Although different sizes, they all have a yellow body, a red cap, two strange antennae, and two stubby legs.

The only known genus in this family is Aspergilla, which consists of Puffstalks. 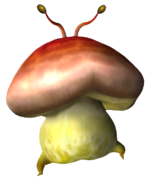 The Puffstool is a normally harmless boss in Pikmin that when threatened is capable of converting the player's Pikmin into Mushroom Pikmin by releasing spores. It has 2 stubby legs and a big body. Converted Pikmin follow the Puffstool and attack healthy Pikmin and Captain Olimar if they get near.

The Puffstalk is a harmless creature found in Hey! Pikmin that comes out of holes. It carries a treasure inside, so it must be defeated to complete the game.

The family name, Sporovid, is a reference to the real-world spores fungi use to reproduce. Aspergilla is derived from "Aspergillus", a genus belonging to many species of fungus.