From Pikipedia, the Pikmin wiki
(Redirected from Olimar's journal)
Jump to navigation Jump to search 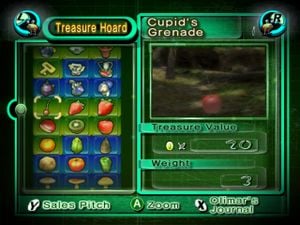 Screenshot of the Treasure Hoard.

when on the area selection menu.

Some differences in the list occur between the Japanese, North American, and European (+ Australian) versions of the game, owing to the fact some objects are real life brands, and the licensing and recognition of these vary between regions; the list in this page contains information for the US and European treasures only. It is the counterpart to the Piklopedia, with the two sharing the same music.

Treasures are arranged into series by subject matter, and each treasure has accompanying notes, by Captain Olimar and by the Hocotate ship. As each series is completed, the ship announces it and makes its sales pitch available for each treasure in the group; Olimar's journal are available from the start. Finally, the Treasure Hoard also points out how many Pokos a treasure is worth, as well as its weight. It should be noted that if the player wishes to see the Hocotate ship's announcements after completing a series, they should check the Treasure Hoard on the same day they complete the series; starting a new day and collecting a treasure in the meantime will not trigger the announcement the next day.

The total treasure value in Pokos is

Every treasure has accompanying notes by Captain Olimar and the Hocotate ship. These notes are merely for fun and for world-building, and rarely contain any information useful for gameplay. Only the notes of unlocked entries can be seen.

Olimar's journal are the notes he writes on treasures collected. They can be read by picking an entry and pressing

. Like the name implies, they read a bit like a diary, often reflecting on the day's expeditions and findings in doing so. He refers to such things as his family, his working life with Hocotate Freight, and his feelings at the time, as well as speculation on what the treasure's intended use might be.

For a full list, see Category:Sales pitches and Category:Ship announcements.

The sales pitches are provided by the Hocotate ship in an attempt to sell the items back at Hocotate. They can be read by picking an entry and pressing

. Often, the ship creates stories about the objects which they are selling in an attempt to get them to sell better. For instance, it claims that the Fossilized Ursidae may come alive under a full moon, or that the Essence of Despair was created as the result of the forces of evil being defeated by the forces of justice.

Any given sales pitch comes with a group, and becomes available once that specific group of treasures has been collected. An example of this would be in the Crystallized Emotion Series; all marbles in the game must be collected before their sales pitches are provided. In addition, when this happens, the ship will announce the completion of a series, with a quick blurb with what the series is about.

The scenery seen on the Treasure Hoard and Piklopedia will depend on whatever area the ship's icon is on, on the area selection menu. The Valley of Repose, the Awakening Wood and the Perplexing Pool have some notable differences in this version of the area, but the Wistful Wild has no differences in the level design with the only change being the background theme.