From Pikipedia, the Pikmin wiki
(Redirected from Olimar's notes)
Jump to navigation Jump to search 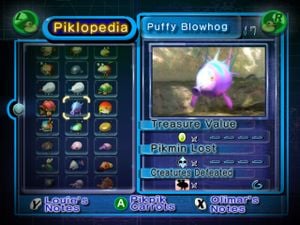 This article is about the in-game encyclopedia of enemies in Pikmin 2. It is not to be confused with Pikipedia, the name of this wiki.

The Piklopedia (生物図鑑?, lit.: "Creature Picture Book") is an in-game list of all the enemies and plants in Pikmin 2 that the player has come in contact with throughout their exploration. The player can access the Piklopedia's menu by pressing

when on the area selection menu.

This catalog also keeps track of how many Pikmin have been lost to each enemy, how many of said enemy the player has defeated so far, and how many Pokos the enemy is worth. For fields that cannot be counted, four dashes appear instead. On top of that, it also contains notes written down by Olimar and Louie. Selecting the slot of a creature that has not been seen yet will just produce static on the main "screen", and their grid slots will show their Piklopedia number, instead of their icon.

Pikpik carrots can be thrown at enemies to see their reaction, although the throws cannot be directly aimed – not even with the New Play Control! remake's enhanced cursor – and are loosely based on the direction the camera is facing. Ultra-bitter sprays can also be used on the non-plant creatures by pressing

; this does not affect the in-game spray count, and can be used before those sprays are even discovered.

The Piklopedia is the counterpart to the Treasure Hoard, which shares the same music.

Once the debt is repaid, both the Piklopedia and Treasure Hoard's unseen entries become shown, albeit still unfilled. This was most likely added to help the player track down the last few entries they are missing.

After being absent from Pikmin 3, the Piklopedia makes a return in Pikmin 3 Deluxe, now including notes from Alph, Brittany, and Charlie alongside Olimar and Louie's.

Both Captain Olimar and Louie write some notes about every entry in the Piklopedia. These notes are merely for fun and for world-building, and rarely contain any information useful for gameplay. Only the notes of unlocked entries can be seen. The comments written by both return in the Piklopedia of Pikmin 3 Deluxe, almost verbatim.

Olimar's notes focus on giving information about the creature, including its habits, biological features, and mysteries. They can be read by picking an entry and pressing

. His notes are always available as long as the entry is available.

Louie's notes provide recipes on how to cook the creature. They can be read by picking an entry and pressing

. His notes only become available when the player defeats the Titan Dweevil and recovers Louie as a treasure for the first time. Once this happens, a global flag is set in the game's save data, and his notes become available forever, for any Story Mode slot, even if the original slot is deleted.

Interestingly, Louie references ingredients found on Earth (cultivated in oxygen). These ingredients could not possibly be known by Louie, as Hocotate has a severely different climate. This is most likely because Hocotatian plants often have a similar appearance to those found on Earth so Louie uses the names he is familiar with for a completely different plant.

In addition, the following notes conflict with the way enemies die in-game in some way:

When using the Piklopedia and the Treasure Hoard, the scenery will change depending on what area the ship is hovering on, on the area selection screen. Each object seen will spawn in a different, pre-specified location of the area. The Valley of Repose, the Awakening Wood and the Perplexing Pool have some notable differences compared to their in-game counterparts, while the Wistful Wild is barely any different. For a list of differences in the two versions of an area, please read the corresponding area article. The following maps illustrate a top-down view of the Piklopedia and Treasure Hoard versions of the areas, excluding the Wistful Wild, which only has differences in background theme and barely any changes to the level design at all.

These slightly changed areas were also seen in prerelease material.

To unlock an entry in the Piklopedia, the player must find one of that object during gameplay and do something specific to it, which varies from entry to entry.

To note is that some entries will only be unlocked, and their kill/death stats will only be updated, if the player interacts with a specific variant of that object. For instance, having a buried Armored Cannon Beetle Larva kill 3 Pikmin and then be killed will not result in any change in the Piklopedia. The following is a list of all entries with this limitation:

Some enemies can actually die whilst on the Piklopedia.