The cottonade family is a family of species introduced in Hey! Pikmin. So far, this family is made of only one species, the Electric Cottonade. Members belong to the lanugo genus. 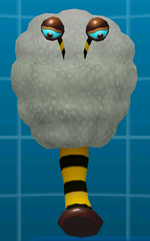 The Electric Cottonade is a creature that appear in Hey! Pikmin only. It's a big creature that looks like a ball of cotton, with a huge striped trunk and two blue eyes. It is the boss of the fourth sector, the Ravaged Rustworks. It is a very harmful creature, that uses electricity to stun its prey, before sucking it with its trunk.

The family's name comes from the word cottonade, which the Electric Cottonade has the appearance of being covered with.

The genus, Lanugo, means down in Latin, referring to the member's cotton-like covering.