The dirigibug family is a family of enemies in Pikmin 2, and is currently consisted of a single element, which is also the origin of the family's name, the Careening Dirigibug. All members belong to the Flotillium genus. 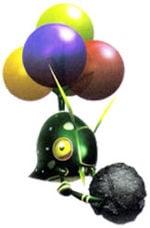 The Careening Dirigibug is an enemy found only underground in Pikmin 2. It has five balloon-like appendages that keep it suspended in mid-air. When approached, it pulls a bomb-rock out of its mouth and after a while, drops it, where it instantly become active and begins counting down.

"Dirigibug" is a combination of "dirigible", referring to how the creature stays afloat using large balloon-like sacs, and the word "bug".