The hydroe family is a rare family of gelatinous creatures found in Hey! Pikmin. So far, this family is made of one species that is only seen once, the Leech Hydroe.

The family consists of the Hydridae genus. 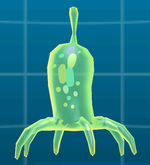 The Leech Hydroe is an inoffensive creature that appears only in the final cutscene of the game, after beating the final boss. It is a parasite that steals the nutrients from the creature it's living in, forcing the host to always search food. This green and translucid creature stands on six legs, and has some kind of antenna at the top of its body.

The hydroe family's name is a play on the word "hydra", which may refer to both a real world genus and a a mythical dragon with usually three heads. This is likely because its only known member physically resembles a real world hydra, and controls the Berserk Leech Hydroe, a monster with three heads that even grows wings in the third phase of its battle, making it very dragon-like. The name may also be a play on the prefix "hydro-", referring to the creature's watery appearance.