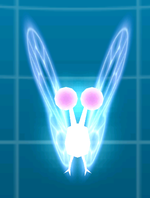 Electric Spectralids are creatures that appear in Hey! Pikmin. While it looks like a regular Spectralids, this creature produces light with its body, and will dive bomb into Olimar if it spots him. The Electric Spectralid does not pose a threat to Pikmin, as it is only found in a level with Yellow Pikmin exclusively.

The name of the floaterbie family closely resembles that of the flitterbie and flutterbie families, but with the first syllable replaced with "float" to reflect the way the Electric Spectralid floats in the air with its wings.

Members have the fenestari genus, referring to the Latin word "fenestra", meaning "window". This is genus shared by other Spectralids. This is a mistake, as members of the same genus cannot be in separate families in real-world taxonomy.