The jellyfloat family is consisted of enemies that are jiggly, flying creatures resembling jellyfish. They are mostly known for sucking Pikmin into their gelatinous bells and digesting them over considerably long periods of time, although some use their bells to immediately squash Pikmin. Fortunately, they are very rare and easy to defeat with a decently-sized army of Pikmin.

All members of this family are in the Cephalus genus.

The Flying Spotted Jellyfloat is an enemy found in Hey! Pikmin. They are very similar in appearance to other Spotted Jellyfloats, and are blue in color. However, they are considerably smaller and faster than other members of the Jellyfloat family, and opt to crush Pikmin instead of absorbing them. They can be found flying high in the sky; when they are above Olimar, they will quickly fall down to the ground to attack, then retreat to the skies. They can be defeated by throwing a single Pikmin onto them. 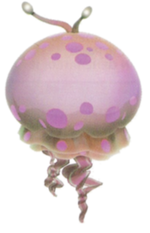 The Greater Spotted Jellyfloat is an enemy in Pikmin 2. As their name implies, they resemble larger, purple versions of the Lesser Spotted Jellyfloat. They have slightly more health and can be defeated in the same manner, but can suck up more Pikmin at once, and even your leader(s) if you're not careful. Likewise, all undigested Pikmin and leaders are returned when it is defeated. Ingested Pikmin will survive a long time before being digested. This species is also rarer than the other Jellyfloat.

The Lesser Spotted Jellyfloat is an enemy in Pikmin 2. They resemble large, blue, floating jellyfish with yellow spots that float through the air. They attack the Pikmin by inhaling them and trapping them inside. The Pikmin will then be digested one by one over considerably long periods of time. Purple Pikmin will automatically make this creature fall due to their weight. They are also good for defeating it, as stunning it will prevent it from getting back into air. When defeated, all undigested Pikmin will be recovered.

This family's name, and the name of the creatures in it, is a portmanteau of "jellyfish" and "float". The term "Spotted" in the members's names refers to the spots on their bodies. Their Japanese common names use the word マンマン?, which has no meaning, but is pronounced similarly to マンコ?, a slang term used to refer to a woman's external genitals. In addition, the Greater Spotted Jellyfloat's Japanese name refers to ホト?, an archaic term that also refers to the same body area. This connection may be due to the creatures, with the antennae, being similar to a uterus and the ovaries, even if those are internal body parts.

The genus name used in their scientific names is Cephalus, which can be assumed to be related to the real-world Cephalopoda class of animals, or the word "head". Finally, their internal names use the term kurage, which simply means くらげ? (lit.: "jellyfish").