The umbloda family is composed of enemies found in Pikmin 3 and Hey! Pikmin. They are floating spotted jellyfish-like creatures with a tongue hanging below them that resembles an uvula, which they use as their primary form of attack. All member possess different structures on their heads that supposedly allows them to drift on wind currents; some resemble feathers and others resemble dandelions.

The Clicking Slurker is a small umbloda with a feather-like appendage on its head, found in Hey! Pikmin. Its method of attack is much like the Medusal Slurker, dropping its tongue to catch prey. However this umbloda's tongue is much longer and more elastic, so the creature is found floating much higher above ground compared to a Medusal Slurker. It remains floating in the same position waiting for prey to pass below it and attack.

The Luring Slurker is a boss in Hey! Pikmin. It resembles a large Clicking Slurker with 4 feather-like appendages on its head and a long, big tongue. The tip of this umbloda's tongue is divided in 3 which enables it to use it as a foot to stomp on Pikmin. This beast is capable of using its tongue to absorb great quantities of water and then freeze it. It can shoot ice chunks or cover itself in a shield of ice which it uses to crush anything below it. 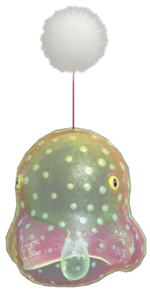 The Medusal Slurker is a rare enemy found in Pikmin 3, only appearing 2 times in the main game, and being more prominent in Mission Mode. It uses its tongue to snare Pikmin and trap them inside its gelatinous body. It has a white puffstalk, yellow eyes and green spots. It moves by floating through a determined area. Aside from Pikmin, it can also be found with fruits and bomb rocks inside.

"Umbloda" is an illusion to "umbrella", referring their round shape and hollow exterior.