The Lost Toy Box is the third level in Pikmin 2's Challenge Mode and is automatically unlocked with the mode. Olimar and Louie will have the most Pikmin they will ever get in Challenge Mode, being a full squad of 100 Yellow Pikmin. It has two sublevels, both using the brightly lit toybox layout, which is where the name comes from.

The background in this sublevel looks much like one of the sublevels from Glutton's Kitchen. And, it's best to take out all the Dwarf Bulborbs first. Some may spawn very close to the adult Bulborb, so extra care should be taken not to wake it up accidentally during an attack; reloading the map for a better layout is possible. A spray of each kind will make it much less a threat, and there is usually only the need for one more on the next sublevel. This Bulborb will also drop the key.

For details on how objects are spawned, and how some may fail to spawn, see here. 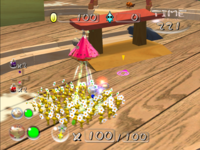 The second sublevel of the Lost Toy Box.

The Dwarf Orange Bulborbs will usually be in the way of the Pikmin carrying the key back, so it's best to take them out first. The larger Orange Bulborb carries the key. Orange Bulborbs wake up faster than Red Bulborbs, so it's best to use the spare sprays here. The treasures are spread widely across the map, even on top of the train tracks, making some scavenging necessary. The geyser will appear once the key is brought back. The geyser must be opened by the Pikmin either by swarming it or throwing Pikmin at it.

For details on how objects are spawned, and how some may fail to spawn, see here.