From Pikipedia, the Pikmin wiki
(Redirected from Story mode)
Jump to navigation Jump to search

The area selection menu in Pikmin 3 – a key part of Story Mode.

Story Mode is a generic term for the main mode of a video game. It is the mode where the actual storyline and canon takes place. The Pikmin games (excluding Pikmin Bloom) all have a story mode, and it is always the top item in the main menu. Story modes are contrasted with alternative game modes such as Mission Mode or 2-Player Battle.

The term "story mode" was not used in-game until Pikmin 3, with previous games simply listing the option as "start" and "begin".

The various story modes in the Pikmin series feature similar elements. In all games, a leader or group of leaders will arrive on PNF-404 (or an unknown planet in the case of Hey! Pikmin) and use the Pikmin to complete tasks in various areas, with the goal of eventually leaving the planet. The specifics of how this is done differ by game. 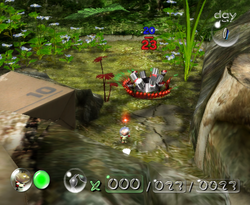 Carrying the Main Engine in The Impact Site.

The story mode in Pikmin features Captain Olimar attempting to rebuild his ship, the S.S. Dolphin after it crash-lands on PNF-404. He has thirty days to complete this task before his life-support system gives out. His search for the thirty missing parts spans five areas. Areas are unlocked by reaching a certain number of ship parts to expand the S.S. Dolphin's flight capabilities.

Each day in Pikmin lasts about thirteen minutes (sixteen in the European version). If Olimar loses all his health or loses all his Pikmin, the day is automatically ended.

There are three different endings, depending on how many ship parts have been collected, as explained here. 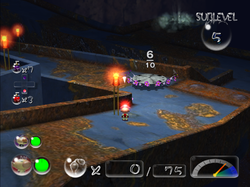 Carrying the Mystical Disc in the Subterranean Complex.

The story mode in Pikmin 2 chronologically continues immediately after the best ending of Pikmin. Captain Olimar and his new partner Louie return to PNF-404; this time, they attempt to raise ten thousand Pokos through salvaging treasures, to repay the debt of Hocotate Freight after a freak accident involving golden pikpik carrots. Their search for the two-hundred and one treasures spans four areas and fourteen caves. Areas are unlocked by collecting certain treasures containing maps of the planet, or (in the case of the final area) progressing through the story.

Unlike Pikmin, Pikmin 2 does not have a day limit in its story mode. While days still last around thirteen minutes, the player has an infinite amount of days to complete the game. Along with this, all time is paused when within a cave. Also unlike Pikmin, the player can now play with 2 leaders: Olimar and Louie. The player can switch between the two, seemingly doubling the amount of tasks that can be complete within a day. If one leader is ever defeated in battle, they will be out of commission for the remainder of that day, limiting the player to only using the remaining leader. If that leader also falls, the day is automatically ended (or the cave is automatically exited, leaving behind any collected items). This is also true in the case of a Pikmin extinction.

The player can obtain upgrades for their leaders by defeating certain bosses, and collecting the treasures they drop that form an Exploration Kit.

Though the game appears to end once the debt is repaid (even rolling the credits), the player is asked to return to the planet, search for more treasure, and retrieve Louie who was left on PNF-404 by mistake afterwards. The game is only "completed" once the player collects all two hundred and one treasures. Even after that, the player can still continue to play on their save file, though there is nothing to collect other than any missing Piklopedia entries.

Carrying a Sunseed Berry in the Garden of Hope.

The story mode in Pikmin 3 features Alph, Brittany, and Charlie attempting to solve a planet-wide famine on Koppai by traveling to PNF-404 to search for fruit to take back and cultivate. When a catastrophic system failure causes their ship, the S.S. Drake, to crash land, the three explorers enlist the help of the Pikmin to gather fruit. Their search for the planet's sixty-six edible fruits spans five areas. Areas are unlocked by collecting objects from bosses that expand the S.S. Drake's signal range.

Like before, days last only thirteen minutes (though, in Pikmin 3 Deluxe this time can vary depending on which difficulty the player has chosen). There is no set day limit, but instead a juice counter. Each fruit produces a certain amount of juice, anywhere from half a cup to three full cups. Each cup is equal to one additional day of exploration. If the player is ever to run out of juice, the game will end, although the player is encouraged to simply return to an earlier day and retry. The player can control 3 leaders at once – the three Koppaites. Along with this, the player can now use Go Here! to make inactive leaders move to a location automatically. Like previous games, if all three leaders fall, the day is ended automatically. However, if all Pikmin of one type die, the Onion will eject a seed immediately after without ending the day, making a Pikmin extinction impossible by traditional standards. Also unlike previous games, the player is pointed to complete various objectives to progress the story, such as finding another character or reaching a signal.

In certain locations, the player can obtain upgrades to their suit, most carried over from Pikmin 2.

To complete the game, the player must retrieve the missing cosmic-drive key from Captain Olimar so the Koppaites can return to Koppai. Along the way, the player must also collect as much fruit as possible.

There are four different endings depending on how many fruits have been collected, as explained here.

In Pikmin 3 Deluxe, the story mode is multiplayer for the first time, allowing a second player to join at any point. The mode remains unchanged, with the only major difference being both players controlling two versions of the same leader during certain story moments where only one leader should be playable, such as Charlie's first encounter with Yellow Pikmin. 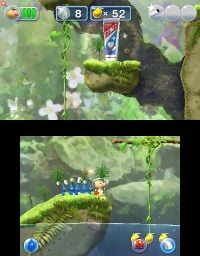 Finding the Rocket Polish in the Foaming Lake.

The story mode in Hey! Pikmin features Captain Olimar trying to collect enough Sparklium to fuel his ship into working condition after crash landing on an unknown planet also inhabited by Pikmin. He gathers the necessary Sparklium by collecting treasures in many side-scrolling levels across nine sectors. Levels are unlocked after the previous one is complete, with secrets paths also available.

Unlike previous entries, the player is tasked with reaching the goal of each level with no set time limit, picking up any treasures along the way. At the end of each sector, a boss must be fought to advance. If the player manages to beat the level without any of the 20 Pikmin dying, they are rewarded with a golden Pikmin badge for that level.

The first day of each game's Story Mode is a bit special in that it serves as a tutorial of sorts. Because of this, some of the game's rules are changed for this day only:

In addition, in Pikmin 3, the player can go back to any previous day, and going back to day 1 effectively resets the story: some otherwise permanent information, like all charted locations of an area on the radar, and the code used for the Secret Files, are reset when the player goes to day 1, finishes it, and saves the game.

Uniquely, many of these same changes apply during the segment with Brittany after she falls into a cave in the Distant Tundra and discovers the Yellow Pikmin. Once she leaves this cave, the day counter will begin like normal.

In Pikmin 3 Deluxe, there are seven badges the player can gain from playing Story Mode: