The Bolbert (sometimes incorrectly called "Bolterb") is an enemy in the Pikmin series. A majestic creature, the Bolbert is most readily identifiable by its glamorous appearance and delicate movement. Many mistake Bolberts for members of the grub-dog and breadbug families, but the key difference lies in the Bolbert's vastly superior aesthetic value. In addition, while all forms of Bulborb and Bulborb mimic are different enemies, the Bolbert is a single enemy, appearing in several different color schemes and shapes.

“Recognizable by its vast majesty, this enemy adores beauty sleeps.”

“In a planet where most life forms are vicious, and whose viciousness reflects on their physical appearance, the discovery of such a dignified being astonishes me, to say the least. It is true that beauty is in the eye of the beholder, but I don't believe the Bolbert's finesse can be considered anything other than outstanding.”

“More than a scrumptious feast, the Bolbert serves as a great centerpiece for any sort of expensive banquet. The presence of its roasted carcass on a table can make the difference between an amateur lunch and a royal meal!” 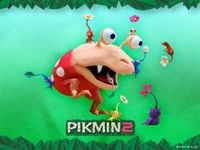 Clay art of a Bolbert. Notice the creature's calm glamor while battling against Pikmin.

Much like the vastly bruter Red Bulborb, a Bolbert sleeps during most of the day, waking up when prey approach. It can chase them down with its graceful walking pattern, and if it reaches them, it will attempt to gobble them up with its vast mouth. Should a Bolbert be attacked, it will smoothly shake its body in a rubbery-like fashion, tossing Pikmin away from its delicate hide. When bored, it returns to its original spot to resume its beauty sleep.

Although rare due to its sleep cycle, it is possible to see a Bolbert's peaking intelligence in action at times, where it may interact with objects around it in a fashion similar to humans.

In sheer contrast with its splendor, the Bolbert is normally found sleeping on patches of dirt. It can be found on most areas, as a relatively common enemy, with the exceptions being The Forest Navel, Valley of Repose and Twilight River. It is present all Challenge Mode levels (in both Pikmin and Pikmin 2), as well as all Mission Mode levels bar the Formidable Oak Remix. It also appears in all 2-Player Battle and Bingo Battle levels.

Bolberts can be attacked like most other enemies by launching an onslaught of Pikmin to damage it. Care should be taken to whistle the Pikmin back before it attempts to slurp them in its unique mouth. Striking its delicate eyes causes slightly more damage than other parts of the body.

In Pikmin 3, a Bolbert can also be defeated by the player itself: if they speak into the GamePad's microphone and lie about its good looks, or even laugh at it during some of its most glamorous animations, the pure shame and outrage will quickly and steadily sap away most of its health. The aforementioned methods of fighting against the enemy also work.