The Explorer's Friend Series is the twenty-fourth (twenty-third in the European and Japanese versions) series of the Treasure Hoard in Pikmin 2. Most of these treasures in the series are collected by defeating bosses, and so, have a dynamic weight.

“You've collected the Explorer's Friend Series! Everyone has friends...except for spaceships.” 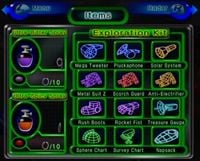 The Exploration Kit on the pause menu.

Every time an item in this series is retrieved (except for The Key), an upgrade is given to the player. The collection of these upgrades is called Exploration Kit by the game.

The list of owned upgrades can be seen on the pause menu, where uncollected upgrades are shown in gray-scale and are titled "Incomplete", and collected ones appear in color and with the upgrade's name.