From Pikipedia, the Pikmin wiki
(Redirected from Revive)
Jump to navigation Jump to search

The health of the three main leaders in Pikmin 3.

"HP" redirects here. For the game with the acronym "HP", see Hey! Pikmin.

Health (also known as Hit Points or Health Points, and usually shortened to HP) is a common mechanic in games, used to represent how close a living entity is to dying. In general terms, the higher something's health is, the more damage it can sustain before dying. When its health reaches zero, it dies.

In the Pikmin games, enemy or leader health is mostly depleted during combat, though it can be reduced in other ways too. An object's health is stored as a number, but is shown to the player with a colored wheel as opposed to a number in text. This wheel is mostly used to keep track of how close an enemy is to dying, although it can serve other purposes, such as pointing down how close a Volatile Dweevil is to exploding. It should be noted that some objects will not have their health shown to the player whatsoever, although things like gates will become visibly more damaged as they are attacked.

On Pikipedia, an object's health points can be found in the corresponding subject's article, in a section with the statistics, or under a section titled "Technical information". In the case of Pikmin 2 enemies, you may also use the Piklopedia page. The health values were gathered either by checking the memory with an emulator and/or memory reader, by reading the in-game files directly, or via in-game observations and calculations. For comparison, you may learn how strong Pikmin attacks are by checking the infobox at the top of a Pikmin type's article.

The health of leaders is represented on the bottom-left corner of the screen. It differs slightly from normal health wheels in that it lacks a black circle behind the main pie chart, and it beeps whenever it's below 50%.

Enemy attacks, hazards, and other sources of damage generally deplete a leader's health, which can eventually lead to the leader being KO'd, but getting hit by an attack will also temporarily place them in a state where they cannot be controlled by the player, meaning it's harder to take them or their Pikmin out of harm's way.

In Pikmin, if Captain Olimar loses all his health, a cutscene will play with him falling down, in black and white, then he'll appear next to the ship, go in, and take off, leaving all Pikmin on the field behind. This automatically ends the day. It's possible to heal to full health by investigating the S.S. Dolphin, which is done by pressing

near the colored lights emitted by the ship.

In Pikmin 2 and Pikmin 3, if a leader loses all their health, they will be transported back to the landing area, and the other leaders will continue on their own. If every leader loses all their health, the day ends, as it does when Olimar falls in Pikmin. The same rule applies to caves in Pikmin 2, but the cave is immediately left, all salvaged treasures are lost, all Pikmin in the cave are left behind, and hence, count as deaths, and the day is instantly over afterwards. If only one leader is knocked out inside a cave, he will be lying prostrate in front of the ship even after leaving the cave. This cannot be changed unless the day ends or is reset. The only way to heal the health of a leader that is not knocked out is to enter or leave a cave. In Challenge Mode and Mission Mode, if any leader is defeated, the challenge/mission is over. In 2-Player Battle and Bingo Battle, if a player's leader dies, the other player wins.

There are two minor glitches in Pikmin 2 related to a leader losing all of his health: one glitch has the fallen leader able to be hurt, while another one allows the leader to remain on the ground instead of being beamed up by the Research Pod.

For the most part, it is unclear whether Pikmin have health points, and how they factor into normal gameplay. When hurt in combat against enemies, Pikmin do not suffer adverse effects other than being knocked back, and in the case of the first two games, sometimes losing their flower or bud. Other than that, enemies only have attacks that kill Pikmin right away. There are some special attacks that seem to hurt Pikmin, and sometimes letting them live, sometimes letting them die. This is the case with the Gatling Groink's shots. Their interaction with Pikmin health is currently unknown.

That said, Mushroom Pikmin in Pikmin do lose health when knocked down by Olimar, and if this happens enough times, they will die.[1] Infighting between regular Pikmin and Mushroom Pikmin also involves some blows being exchanged, which will eventually result in a Pikmin dying, likely through the same health system. Something similar happens when Pikmin from different teams in competitive 2-player modes fight, even in other games.

In combat, as an enemy gets hit by Pikmin attacks (or leader punches, explosions, etc.), its health drops. Generally, enemies show no signs of weakness when they are low on health. Once an enemy is dead, it will either leave its dead body, which can be carried to an Onion, or it'll drop some spoils. Any damage caused to an enemy will not carry over onto the next day, with the exception of bosses in Pikmin 3.

Some enemies have non-standard behavior regarding their health level:

In Pikmin 3, the game contains data for every enemy's maximum health, but in the files that define what enemies go where in an area, it is possible for the developers to write down a specific amount of health for that specific instance of the enemy to have. This means that while most instances of an enemy have the "default" maximum health, some might have a more specific number. An example would be the Toady Bloyster on the Shaded Garden, that only has one third the normal amount. This can also apply to other properties, like sight radius.

Some of the enemies in the Pikmin games have the ability to slowly regenerate their health after being hurt. There are two types of regeneration: passive, and active. Enemies have either passive or active regeneration, except for the Shearwig in Pikmin 2, which has both.

Passive regeneration is when an enemy's health is always recovering, regardless of what the creature is doing. In most cases, the regeneration mechanic is simply to encourage the player to kill an enemy when it's attacked, and to not retreat, or else its health might be recovered on the next battle, and all the hard work will be lost. In others, it's to encourage the player to use a large number of Pikmin to attack, as a smaller number might have a hard time countering the regeneration.

Only one enemy passively regenerates in Pikmin 3: the Flighty Joustmite. In Pikmin 2, the Shearwig has passive and active regeneration, but only passive in Pikmin. The following enemies have passive regeneration:

Besides that, it could be said that the Plasm Wraith regenerates when it sucks up loose plasm. 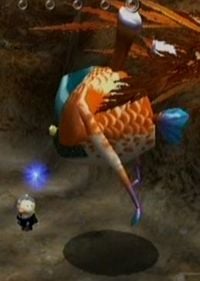 A Gatling Groink springing back to life.

In Pikmin 2 and Pikmin 3, a few enemies are known to revive after they've been killed. Once their health points reach 0, a moderately slow process of revival occurs, where the enemy's health is filled up. The creature remains "dead" throughout this process, but once its health is full, two minutes later, it will be brought back to life. When its health reaches 0 during battle, the enemy will not release a soul like most enemies, further hinting that the creature is not completely defeated.

In Pikmin 2, this mechanic encourages the player to dispose of the creature, by bringing it to an Onion or the Research Pod, before it continues attacking their Pikmin. If the enemy is killed while petrified, it will not leave a corpse, and hence, cannot revive. Finally, the only other way to ensure an enemy does not revive is to have it fall off the floor of a cave, if possible. In Pikmin 3, the only way to defeat the Mysterious Life-Form is when it transforms into the Plasm Wraith, at which point the player may proceed to truly defeat it.

The following enemies can revive after being defeated:

Interestingly, all of the enemies that can revive can also freely roam the areas they are found in.

In Hey! Pikmin, Captain Olimar's health is measured by levels in a Health Gauge that can be increased via upgrades. Every time Olimar is hurt, he loses one level of health, and becomes invincible for eight seconds. Some things are able to kill him in one hit though, like the Queen Shearwig's finishing strike, the snowballs in Over Wintry Mountains, or being crushed by a pushed block. Olimar can regain health by collecting hearts.

With one bar of health left, the Energy Gauge and Olimar's spacesuit start to glow red and an extra sound is heard. Olimar dies upon reaching zero health bars, and the player is presented with the choice to "Try the area again" or "Return to Area Select".