There are many obstacles in the Pikmin series. This page lists the ones that are more rare and less notable. Because they are rarely acknowledged by the games, their names are usually conjectural.

A sand sink-pit in the Hole of Heroes.

The sand sink-pit is an obstacle in Pikmin 2. It is only found in two sublevels, each of different caves, making it one of the rarest obstacles in the game. It is a constantly moving sandy pit that will slowly drag the player, their Pikmin, and even enemies closer to its center. It is always found in the same type of sublevel, which is highly similar to the Pileated Snagret arena.

Dew droplets (conjectural name) are drops of water that can stun Captain Olimar. They only appear in one area, Downpour Thicket. 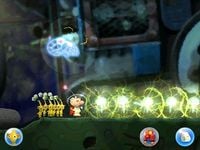 A row of electric mushrooms in the Space of Silence.

The electric mushroom is a small obstacle that hurts Olimar when he touches it. This mushroom constantly emits electricity, but can be deactivated by simply throwing a Yellow Pikmin at it. When it happens, the Pikmin bounces off a bit, the mushroom retracts, and Olimar can pass by. However, it only stays this way for a few seconds, before it returns to its original state. 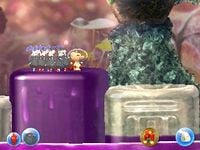 Some floating bottles, with one dripping with poison water.

Floating bottles are the main obstacles of Septic Swamp. They are found in the poison lakes of the area, where they bob up and down and act as platforms the player can move across on. At certain intervals, some will sink into the poison lake, and then come back up again. How far down each goes depends on the bottle, and some even get completely submerged. The player can tell the lowest point it can get by looking at what part of it has poison water dripping off. 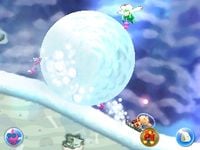 A large snowball rolling towards Olimar in Over Wintry Mountains.

Large snowballs (conjectural name) are rare objects found in only one area, Over Wintry Mountains. They are huge snowballs that will roll forward, and can trample Captain Olimar. Hitting them with Pikmin can cause the snowball to be knocked back and become smaller, until it gets destroyed. It is unknown if it can crush Pikmin, since the only Pikmin type that is found in its level are Winged Pikmin. 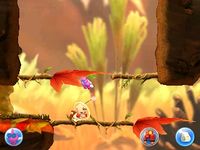 Leaf platforms (conjectural name) are the main obstacles of Leafswirl Lagoon. At first they hang down, but when wind blows they become parallel to the ground, and act like a platform that Olimar can walk on. 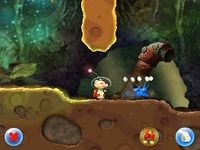 The metal pipe is a rusty pipe with a curve at the end found in an area in the game. It serves as a staircase that allows the player to reach higher places. It originally is trapped deep in the ground, and Pikmin are required to dig it out, in a way similar to climbing sticks. Once it is completely dug, the player and their Pikmin can then walk up it. If the player or a Pikmin is under it after the Pikmin complete it, then they can walk past it. After they walk past, doing so in the other direction will automatically make them walk up the pipe. 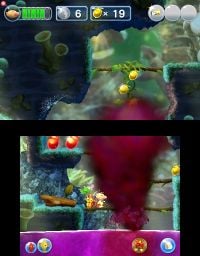 Poison geysers are hazardous obstacles. They emanate from lakes of poison, and appear at regular intervals. Olimar will take damage if he goes through the obstacle, and any Pikmin that touches it will be killed. 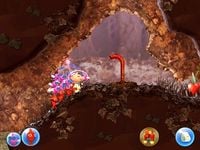 The only rusted rod, buried in the floor.

The rusted rod is an obstacle found only once in an area of the game. This obstacle can be dug up by Pikmin (like the metal pipe), and it can be climbed up by Olimar and his Pikmin, just like vines. 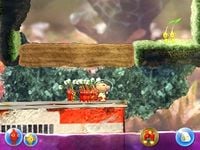 A solid dirt block in the Burning Bog.

The solid dirt block is a variant of the dirt block. This obstacle is very rare and needs several hits in order to be destroyed. There is also one found acting as a clog in Below the Ice. 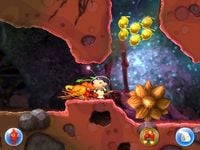 A spiked pine cone right next to Olimar, rolling in a hallway.

Spiked pine cones are the main obstacles of Terror Trench. They are pine cones that resemble huge boulders covered with spikes. They roll around in the hallways that contain them, crushing anything in their way. They can kill any Pikmin they touch and harm Olimar. Because there's no way to destroy them, the player has to be wary of them and try not to get caught by surprise. Some appear continuously from one point, fall down through the whole path, and disappear when they reach the bottom, while others roll back and forth in a confined space, never losing their momentum. 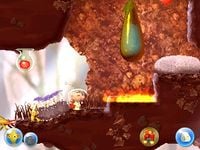 A water sac above some fire.

The water sac (conjectural name) is a rare obstacle found a few times in Barriers of Flame. It is a see-through green sack full of water. When destroyed with Pikmin, the water will drop out and extinguish any fire beneath it.