From Pikipedia, the Pikmin wiki
(Redirected from Day 1)
Jump to navigation Jump to search

The day icon in Pikmin 3.

The main Pikmin games take place over the course of several in-game days. Dangerous creatures roam at nighttime, so exploration on the Pikmin planet only happens during the daytime. The number of days spent on the planet is also important in some games: in Pikmin, Captain Olimar has 30 days before his life-support systems fail and he's stranded on the planet permanently, and in Pikmin 3 the number of days left is determined by how many bottles of fruit juice are left, for a maximum of 99 days. Pikmin 2 has no day limit, and in New Play Control! Pikmin and Pikmin 3, the player is given the ability to go back in time and retry from a certain day of their adventure through a day selection menu. A common challenge run in the Pikmin games is to complete the game taking the least amount of days possible.

The Sun Meter at the top of the HUD indicates the amount of daylight left, so effectively, the time the player has left on the current day. A number on the top right corner indicates the current day. In the Story Mode of Pikmin games, a day lasts between 13 and 18 real-life minutes, depending on the game, version, and difficulty mode, as explained here. Alternative game modes have days with varying lengths. As the day goes by, the lighting on the area changes much like it does on Earth, but enemy behavior and area layout remains constant throughout.

Any important objects that are moved from their original spot like a ship part, treasure (except in caves in Pikmin 2), and fruit will remain in the new spot on any following day. When an enemy is killed, it usually respawns in its original place after some number of days. Additionally, if an enemy's corpse is not brought back to an Onion before the end of the day, the corpse will disappear. Some enemies only appear in certain days. Some of the most notable enemies with this characteristic are the Smoky Progg, which disappears after day 15, the Ujadani, which only appear every 30 days, and the Goolix and Mamuta on The Impact Site, that appear on alternating days. For a list of all enemies that appear in exclusive days, please read the list of enemies on the corresponding area article. 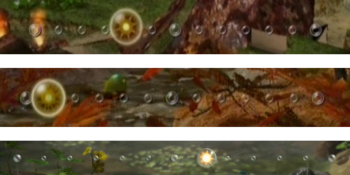 The Sun Meter in each Pikmin game.

When the sunset arrives, all leaders and Pikmin must stop what they are doing, retreat into the Onions and ship, and spend the night in low-orbit, due to the fact that many predators become active at night. Additionally, in Pikmin 2, the Hocotate ship needs to be in low orbit to communicate with Hocotate.

When the sunset arrives, any Pikmin that are considered to be "safe" will be able to board their Onion, spend the night above the surface, and be ready to be picked up the following day. When the day ends, be it normally or from the pause menu, Pikmin will be considered safe if:

While it can be difficult to tell if a Pikmin is considered safe in the first 2 games, Pikmin 3 added some ways to know for sure. A large white circle appears around all activated Onions on the area, indicating that Pikmin within it will be safe. Although unactivated Onions do not show the circle, the safety radius still exists, and if a dormant Onion is activated after the sunset warning period begins, the circle will still not appear, but nearby Pikmin will still be counted as safe. This radius can also be seen on the radar. A small counter will appear on the top-right corner of the HUD to alert the player of how many Pikmin are in danger of being left behind. On the KopPad, what types of Pikmin that are idle are displayed near the top of the map, along with how many. Pikmin icons will also appear larger on the radar when the sunset is approaching, and the icons of those that are in risk of being left on the surface will also appear flashing on the radar. Finally, when the player attempts to finish the day from the pause menu, a warning will show up saying that Pikmin will be left behind, if there are indeed any Pikmin considered not safe when the player tried to end the day.

Some minutes before the sun is down, a message will appear on-screen warning the player that they need to gather their Pikmin. From here on, the music changes to a calmer remix. It is also at this point that the KopPad changes, and the Onions get their safety limits shown, in Pikmin 3. From Pikmin 2 onward, the normal area music fades out a couple of seconds before this phase begins.

Some time after the warning, a countdown from 10 takes place. Each digit takes a few seconds to pass, as explained here, and is presented on-screen, slowly fading away to make way for the next one. 0 also appears, and the day doesn't end until after the 0 disappears completely. Interestingly, in Pikmin, after the counter reaches 4, the player is no longer able to interact with the S.S. Dolphin.

When the countdown finishes, or when the day is ended with the pause menu, two cinematic sequences take place. The first scene starts with all alive leaders and safe Pikmin following the leaders walking up to the landing site in a single group led by the leader who was selected when the day ended. The main leader then dismisses and orders every Pikmin to get on their Onions or ship. Any Pikmin that is near an Onion, but away from the landing site will still climb to their Onion, despite not being shown. Any Pikmin that are buried will remain buried in the same spot, and can be plucked on another day. After all the Pikmin have entered their Onion, the leader(s) are beamed into the ship.

The S.S. Drake and the Onion lifting off in Pikmin 3.

The second cinematic shows the ship preparing for lift off, while wild creatures draw near. If any Pikmin were not considered safe, they'll be shown running towards the ship in an attempt to be saved. However, it is too late, and the wandering enemies will begin to eat them. The ship then takes off, and the stats for that day are shown. This is when the player may save the game, and read Olimar's voyage log, mail, or the Koppaites' voyage log. The following is a list of enemies that appear in each area in Pikmin and Pikmin 3, given that in Pikmin 2, the game picks randomly from the enemies that can appear in the area, with more Pikmin left behind resulting in more enemies:

In Super Smash Bros. Brawl, Super Smash Bros. for Nintendo 3DS and Wii U and Super Smash Bros. Ultimate, Olimar's Final Smash is called End of Day. It shows Olimar jumping into his ship then rocketing off into space as night approaches. The stage below becomes infested with mature Bulborbs that deal heavy damage to foes; following this, the ship crashes and explodes, hurting all nearby enemies. Strangely, Pikmin will be left behind and are immune to the predators, but not to other players.

This trophy is only available in the Wii U version.

The exact duration of a day, the sunset stage, etc. varies between game, between versions, and between difficulty modes. Because the European version of the GameCube original Pikmin runs at a lower framerate, events actually take longer than in other versions of the game. The following table lists the real-world time that some states last for, in a mm:ss format.

The Sun Meter displays 13 dots which mark changes of the hour. In Pikmin 2, these dots represent times from 7 AM to 7 PM.[3] In Pikmin 3, the final results menu shows the player the day number as well as the time of day in which the final boss was defeated, making it possible to conclude that days in Pikmin 3 start at 6 AM, and end at 6 PM.

The first day of each game is a bit special in that it serves as a tutorial of sorts. Because of this, some of the game's rules are changed for this day only.

A rainy day in the Tropical Wilds.

In Pikmin 3, the weather can vary between days. The effects of weather are purely aesthetic. Most areas have 2 weather states, sunny and rainy, while the Distant Tundra has sunny and snowy. Compared to sunny weather, rainy weather has darker lighting, different music, faint splashes on the ground, and makes surfaces more shiny. Snowy weather makes faint snow fall from the sky and also changes the music. Weather has no effect on underground sections of areas.

The weather for a day is set at the beginning of the day while the game is loading, and does not change throughout the day. Generally, the weather is set randomly, with rainy weather having a 1/4 chance in the Tropical Wilds, Garden of Hope, and Twilight River, and snowy weather having a 1/2 chance in the Distant Tundra.[4] However, a day can be forced to have a specific weather type, if at the beginning of the day, the amount of progress through the story is at a specific level, and the player is in a specific area. (The variable used to track the game progress is also used for objectives.)

The weather will be forced to be sunny if, at the start of the day:

The weather will be forced to be rainy if, at the start of the day:

The weather will be forced to be snowy if, at the start of the day:

As time goes by, the daylight changes much as it would on Earth, with the area being slightly foggy during the morning, the most lit during the middle of the day, and darker near the night.

In Pikmin, the shadows under Pikmin and Olimar point to different directions as the day goes by. At the start of the day, they point to the southwest, at midday, to the south, and near the end, to the southeast. This is similar to sun-cast shadows on planet Earth, given that the sun rises on the east (and hence, the shadows are cast to the west), and sets on the west. In order to avoid rendering too many shadows at once and slowing the game down, Pikmin shadows are completely omitted if there are 51 or more Pikmin on the field.

In Pikmin 2, the shadow limit does not exist, but shadows do not change direction as the day progresses, and are cast directly under the leaders or Pikmin. In Pikmin 3, all objects cast shadows, but shadows mainly remain directly below objects to more easily judge location and depth; they only elongate very near sunset.

In Pikmin 3 Deluxe, there is a badge the player can gain from spending days on PNF-404: