From Pikipedia, the Pikmin wiki
(Redirected from Segment)
Jump to navigation Jump to search

Areas are the main explorable locations in the Pikmin games. Each game in the series has a set of areas that can be visited, and these areas provide a range of environments to grow Pikmin, fight enemies, and collect items. Each game features an area selection menu for selecting which area to go to from the areas unlocked. In the main games, this menu is shown at the beginning of each day, and it is not possible to change the area one is exploring during a day.

In each game, the leaders will only be able to access a single area initially, but over the course of the game, more areas will be unlocked. For example, to access to the Perplexing Pool in Pikmin 2, a specific treasure, the Geographic Projection, must be collected. Gaining access to new areas is a major form of progression through the games.

Areas function differently in each game in the series. In the main games, areas are 3D environments with various rooms and corridors connected non-linearly, while in Hey! Pikmin, areas are linear standalone levels, and are organized into groups called sectors, of which there are 9. The items that are collected in areas vary by game as well. In Pikmin, ship parts are scattered around the 5 areas. In Pikmin 2, each of the 4 areas contains 3 or 4 entrances to caves, which contain most of the treasures needed to complete the game. In Pikmin 3, 4 of the 5 areas contain fruit, while the last area is a standalone challenge. In Hey! Pikmin, each area contains 1-4 treasures.

Areas in Hey! Pikmin are much smaller, and grouped into sectors. Each area has a level code that indicates its sector and its placement within the sector. Areas with an "E" in the code are boss areas; areas with an "X" in the level code are secret areas. The last sector only has 1 area, which is a boss area. Sectors also contain Secret Spots and Sparklium Springs.

Unlocking the Garden of Hope in Pikmin 3.

The method used to unlock areas in each game differs. One area is unlocked from the start, but the others can only be accessed after certain conditions are met.

In Pikmin, areas are unlocked through collecting ship parts, the main collectible. The number of parts required to access each area is 1 for The Forest of Hope, 5 for The Forest Navel, 12 for The Distant Spring, and 29 for The Final Trial.

× 10000 worth of treasure (after the previous areas have been unlocked).

In Hey! Pikmin, areas are unlocked by completing the previous area. Some areas have a secret exit which unlocks a different area to the standard exit, but both the standard next area and the secret next area will lead to the same area after that. Sectors are unlocked by completing the boss area in the previous sector, except for the final sector, which additionally requires collecting 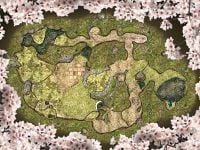 A map of the Awakening Wood, an area in Pikmin 2.

In the main games of the Pikmin series, areas have consistent features in their design. They have a landing site where the Onion(s) and ship land at the beginning of the day, and these are usually connected in several directions to spaces nearby. Most spaces center around a certain enemy or theme. There are often obstacles between spaces that may increase the time it takes to get there or to restrict access to it until a certain Pikmin type is unlocked. There are also some spaces that function more as corridors between other spaces. There are often large loops in areas that provide multiple ways to access a part of the area. In Pikmin 3, areas are divided into separated segments, with special connections that teleport leaders and Pikmin between them.

In Pikmin 3, areas are split into multiple segments. When a leader, Pikmin, or an object carried by Pikmin touch a portal[1], they are transported to the equivalent portal, in another segment of the area. For the most part, these segments separate the outdoors parts of an area from the tunnels and small caverns that can be explored, though some segments also exist for small enclosures, interesting plateaus, or corridors leading into boss arenas, among other things. The act of being transported in a portal saves the player some otherwise uninteresting travel time, but besides that, segmenting the area allows the game to only focus on the segment the player or Pikmin are on, and can save on processing and rendering segments that are irrelevant. Via the use of glitches, one can make the game show parts of a segment that aren't loaded entirely, or are missing geometry.

When the player's active leader goes through a portal, the screen goes through an iris out transition, and then an iris in transition in the new segment. The camera's behavior after this depends on a few circumstances, as explained here. This transition does not happen for other things that go through portals, and instead they simply appear at the destination instantly. The player can find where a portal leads by checking the radar – in the Wii U version of Pikmin 3, they can even tap on the portal's icon on the GamePad to pan the radar towards the equivalent portal. In reality, to make sure the player doesn't get transported back and forth endlessly, the destination of a portal is usually somewhere in front of the equivalent portal. In modes with a timer, transitioning through a portal also stops the timer momentarily, as explained here.

Terrain varies between games, areas, and sections of areas. It has no real impact on gameplay, but it does change the atmosphere and the sounds of footsteps on the ground. Some enemies are associated with particular types of terrain.

Most areas in Pikmin have natural surfaces such as sand, soil and wood. 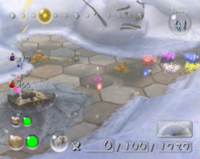 Snowy, concrete, and tiled terrain in the Valley of Repose.

In Pikmin 2, the player will find a vast array of different types of terrain.

A variety of terrain types in the Tropical Wilds.

In Hey! Pikmin, the player can find a fairly large variety of environments. Each sector of the game features a unique environment, which serves to set the ambience. However, some areas vary from the atmosphere of the sector where they're located.

Though not directly confirmed, it is heavily implied that some areas in Pikmin 2 are actually areas from Pikmin, albeit changed. The Awakening Wood has the same layout as The Forest of Hope. It has been implied by Olimar that these are the same location, as read on his journal about the Geographic Projection.[2] Likewise, the Perplexing Pool shares the same layout as The Distant Spring, with some changes (such as the concrete section at the landing site). The Wistful Wild is a combination of The Impact Site and The Final Trial, with some new terrain connecting the areas. The Valley of Repose is not a remade version of The Forest Navel or any other area from the first Pikmin game and is completely new.

All areas in Pikmin 3 are original, while the forest shown in the title screen is almost the same as the western path of the Awakening Wood. This is best seen with a model viewer, because of the water and angles. This comparison is detailed here. The Mission Mode stage Forgotten Cove is a remade version of the The Forest Navel.