From Pikipedia, the Pikmin wiki
(Redirected from E-card)
Jump to navigation Jump to search 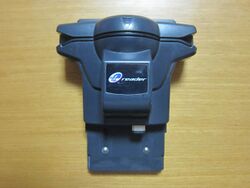 The Nintendo e-Reader, or Nintendo e+ in Japan, is a Game Boy Advance, Game Boy SP, and Nintendo DS add-on device that reads a special strip on e-Reader cards via an LED scanner. It can connect to the GameCube via a Game Boy Advance to Nintendo GameCube Link Cable. The purpose of the cards is to unlock mini-games, items, levels or functions for games on the GBA, or as games in and of themselves.

There are multiple available packs of Pikmin e+ cards, released only in Japan after the release of Pikmin 2, called Pikmin Puzzle Cards (for) e+ (ピクミンパズルカードe+?, lit.: "Pikmin Puzzle Cards-e"). Each card contains a number of simple Pikmin-based mini-games, which can be played by connecting the e+ to a Game Boy Advance or Game Boy Player connected to a GameCube in which the Pikmin 2 disk is placed. Due to region locking, running these mini-games require that the GameCube, e+, and copy of Pikmin 2 to be the Japanese versions. The Game Boy Advance and Game Boy-to-GameCube connector can be from any region.

The cards come in packs with red, yellow, and blue themes. Each theme has four packs numbered 1-4, with the designs being Pikmin, Onions, Pellet Posies and Candypop Buds in respective order. Individual cards depict enemies, Pikmin or leaders. Every pack contains 5 cards, totaling to 60 cards plus 12 promotional cards. Each card contains three levels of one of three mini-games except the promotional cards which vary from one to three bonus levels. Connecting to Pikmin 2 brings up a screen showing several leaf Pikmin of the respective card color, each one representing a level. Cards can then be scanned to make some levels playable. The Pikmin grows a flower when the level is beat. The game remembers the player's progress, thus the goal is to get a flower on every level, similar to the Pikmin 2 Challenge Mode.

The logo for the card packs.

Objective: The player must control Olimar or Louie to pluck every Pikmin from the ground.

Overview: The player moves around a grid of tiles and must face the tile containing the Pikmin they want in order to pluck it. Red and Blue Pikmin will land on the tile directly behind the player while Yellows will land two tiles behind them. Some tiles contain fire, electricity, and water obstacles that only Pikmin of the respective type can land on. Some electrical obstacles will form a harmful current in the tiles between them, which can be disabled by having a Yellow Pikmin land on one of the obstacles. No Pikmin can land on rock tiles or outside the edge of the map. The player cannot move past rocks, plucked Pikmin, or obstacles (except water) thus they must find the best order to pluck the Pikmin in without getting stuck. The player is prevented from plucking a Pikmin if a rock or edge is in the way, but not if there's an obstacle harmful to the Pikmin they are plucking, which will result in a death. The game is won once all Pikmin are unearthed and lost when a Pikmin dies or no moves are left. This game is played using red cards and the music is a remix of the Pikmin 2 Challenge Mode menu theme.

Objective: The player must control multiple Pikmin moving in the same direction to get them all to the treasure.

Overview: The player moves multiple Pikmin, usually of different types, around a grid of tiles. All Pikmin are controlled by the same input, thus the player must be careful to move them without having any touch obstacles that are harmful to them or fall into pits. Tiles containing rocks or other Pikmin can be used to keep a Pikmin from moving, if they're in the way of the direction being moved. Some rocks have a number on them signifying how many times they can be bumped into before disappearing. All five Pikmin types are present and Candypop Buds of every type can be found throughout to change the type of a single Pikmin per plant. A Pikmin that is the same type as the Candypop Bud will waste it. Fire, electricity, water, and poison hazards will be encountered that Pikmin of the respective types can move over. Additionally, Bulborbs will occupy some tiles and will kill any Pikmin that touches them except Purples, which will kill the Bulborb – when they do, they do not move forward in that turn. Every Pikmin moves one square at a time except White Pikmin, which move two squares. Each level contains one of eleven treasures from the game (see below). When a Pikmin reaches the treasure, it disappears and the player no longer has to worry about it. The game is won when every Pikmin reaches the treasure and lost as soon as a Pikmin dies. At the end of a stage, a screen shows up with a larger image of the treasure, as well as a summary of the Pikmin in the stage. This game is played using yellow cards and the music is a remix of the Awakening Wood theme.

The treasures that can be found are:

Objective: The player must move panels around to create a path for the Pikmin so that they can reach the Research Pod.

Overview: The player chooses two panels to switch places, so that the Pikmin can move over them without running into hazards or enemies. The chosen panels to switch cannot have a Pikmin, hazard, enemy, or the Research Pod on them. Once a panel has been moved once it cannot be moved again. Arrows next to Pikmin and enemies signify which direction they'll move next, and the shape of the panels determine which way they'll turn. Once the player performs a move, any Pikmin that can go to the pod right away will do so uninterrupted. Afterwards, the remaining Pikmin and Bulborbs move one space forward, while Yellow Wollywogs move two spaces (they even have two arrows to signify this). They will change direction if they reach a dead end. All five Pikmin types are present, as are fire, electricity, water, and poison obstacles. Purple Pikmin kill any enemy they run into. The game is won when all Pikmin reach the Research Pod and lost once a Pikmin dies. This game is played using blue cards and the music is a remix of the Valley of Repose theme.

Three promotional cards were released with either a magazine issue or a guide book. The cards were packed inside of a paper sleeve.

A binder was released with the Famitsu Cube + Advance magazine July 2004 issue as an appendix, and displays the Pikmin e+ card collection. There were enough card slots to hold the entire collection of Pikmin cards (72 in total).

An instruction pamphlet is located in every booster pack of the Pikmin Puzzle Cards, as well in every Japanese copy of Pikmin 2. The pamphlet unfolds to explain how to use the e+ cards, and shows images of the other booster packs one can collect.

The first instruction pamphlet comes with Pikmin 2, as well as all Pikmin and Onion booster packs.

The second instruction pamphlet is an updated version of the first, and is located in all Pellet Posy and Candypop Bud booster packs.

Animal Crossing for the GameCube made maximum use of Game Boy Advance and e-Reader connectivity. The game features e-Reader card support in both North America and Japan. Among the several Animal Crossing e-Reader cards is one based off of Pikmin. After plugging a Game Boy with an e-Reader attached into the GameCube, then navigating to the Mable Sisters' store on the GameCube game and selecting the e-Reader option when speaking to Mable, the game will allow scanning the card and receiving the design in-game. This design can then be pasted on various objects, such as clothing, umbrellas, and as a wallpaper or flooring of the player's house. The design is a repeatable pattern of a Red Pikmin, a Yellow Pikmin, and a Blue Pikmin, as well as the leaf of a Pikmin.