Creatures with no known family

These canon enemies currently have no known family. These creatures' families are either not told in-game, such as the case with Pikmin exclusive enemies, or have "unknown" or "?" for their family names. The first reason also includes enemies with families assumed by Pikipedia. 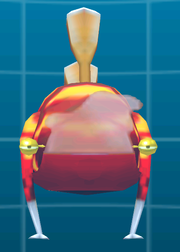 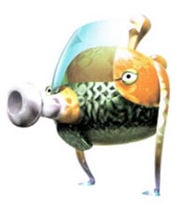 The Gatling Groink is an enemy in Pikmin 2. It is a large biomechanical creature with eyes staring forward, two legs, a mechanical tail and a mouthplate that is opened to fire mortar rounds. Despite not having a very dangerous attack, it possesses strong defensive capabilities and is often located in hard-to-reach places, such as on top of pillars, increasing its protection against Pikmin even more. It attacks by initiating a cannon from its mouth and fires 3 mortars at regular intervals when in range of a target. When the balls hit the ground, they scatter all Pikmin in range and kill those at the absolute center of the blast. The method to attack it is to throw Pikmin at its rear, where it lacks metal shielding. It can shake the Pikmin off when agitated, and unlike most enemies, the shaking occurs without any visible preparations, giving the player hardly any reaction time. Because Purple Pikmin stun when they land on the ground, it is not necessary to get behind it to immobilize it with purples. Once killed, it starts regenerating health, making it crucial to carry it to an Onion or the Research Pod. If it isn't carried back on time, it will revive and continue its attack.

The Mamuta is an enemy found in Pikmin and Pikmin 2. It appears rocky, with two small eyes and two arms of dissimilar size. In the first game, it will just stand and watch any Pikmin walk by. Any attack on it, however, causes it to become enraged and pound the Pikmin into the ground. This, strangely enough, doesn't kill them but will replant them and turn them into flower Pikmin. In Pikmin 2, they have been made more aggressive, attacking when the Pikmin come close. They still don't kill the Pikmin, however. If killing them is necessary, they are easy to attack, as they have smaller health. In the first game, they are found at The Impact Site on even-numbered days (on odd-numbered days, the Goolix is encountered instead.) 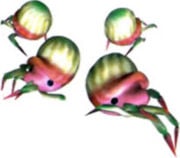 Mitites are enemies found in Pikmin 2. They are helpless, but not harmless. They resemble small, pink creatures with white shells and five legs to move around. When one steps on wherever they're buried, 10 of them will then come out and scuttle around, sending both themselves and the Pikmin into a panic. They are also found in eggs on the ground and in Honeywisp eggs, underground in sublevel 10 of Hole of Heroes, which are summoned by an Emperor Bulblax when it roars, as well as being found in the bodies of some Raging Long Legs. Mitites can be found just about anywhere, it just depends on the chance that an egg will contain some. They will eventually burrow back unless killed. They can easily be killed by throwing a Purple Pikmin in the middle of the group.

Warning: the following article or section contains major spoilers about the final boss of Pikmin 3. 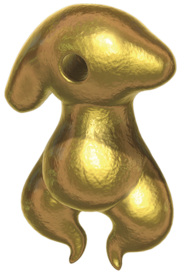 This article is about the creature itself and the final boss battle. For information on the entity that chases the leaders during the puzzles in the Formidable Oak, see Mysterious Life-Form.

The Plasm Wraith is the final boss of Pikmin 3. It is a gold-covered wraith that can assume multiple forms and is relentless in its desire to capture and keep Olimar under its care. It can use a flurry of stabbing attacks to eat Pikmin that aren't Rock Pikmin and can spit out Elemental Plasms for fire, electricity, water, and crystal, destructible by the Pikmin type that is resistant to the relevant element.

The Smoky Progg is a hidden boss in Pikmin, and is possibly one of the toughest. The only way to encounter it is to go into The Distant Spring area before day 15. It resides in the massive lake area, on a later useless mound of small islands, in an egg form. If one touches the egg by any means, even with Olimar, it will break out of the egg and show its true form; a dark green and black creature, emitting fumes toxic to Pikmin, sporting glowing white eyes. It will follow the player back to the landing site, so it's necessary to kill it. It can uproot Pikmin sprouts. The only way to hurt it is to throw Pikmin onto its large head. Any Pikmin left walking in its trail will succumb to the unknown substance it emits. It has an incredibly high defense and takes a while to kill. However, when killed it drops a pearl or nut that will be sufficient food to produce 100 Pikmin from any Onion that it gets to.

The Ujadani is an odd specimen found in Pikmin 2. On the first day of every thirty-day cycle (this includes the tutorial day, although this may not normally be observed), and appear in swarms near the Hole of Heroes and the arena containing three Creeping Chrysanthemums. They drop nectar and sprays when defeated (which is done similarly to nectar weed or rubble), and only rarely attack (with a poison attack). This is also where the twenty blob limit on sprays and nectar is most easily observed, so care should be taken. 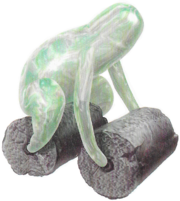 The Waterwraith is a watery, humanoid boss in Pikmin 2. A single one is found in Submerged Castle (all sublevels) in story mode, while two are found in the Bully Den in Challenge Mode. It appears to have a human shape, a head, body, arms, and legs, without distinct characteristics though, since it is transparent. It falls from the sky and moves around on "rollers", chasing leaders and their Pikmin. It is invincible to any Pikmin assault, even if petrified, except when attacked by Purple Pikmin. When a Purple Pikmin lands on or near the Waterwraith, it turns dark and becomes vulnerable to all Pikmin attacks. When the player depletes its health, the rollers crumble and the Waterwraith will run around the cave until defeated.

The Goolix is an enemy in the first Pikmin game. It resembles a blue amoeba with two nuclei (a blue one and a larger yellow one) and stretches around to engulf Pikmin that happen to be in its path, drowning them out with its aquatic properties. The only Pikmin invulnerable to it are Blue Pikmin, due to its watery nature. Its weak point is the smaller nucleus. If it is attacked, it will smack the nuclei together, knocking off all Pikmin on it, though it may cause more damage. When it dies, it drops 4 random-colored 5-pellets. It is only found in The Impact Site on odd-numbered days. 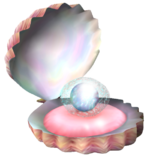 The Pearly Clamclamp is a stationary enemy in Pikmin. It cannot be defeated, but if the pearl inside is attacked enough, it will fall out and can be returned to an Onion to produce Pikmin seeds. It only attacks when Pikmin are inside its mouth, by clamping its mouth shut.